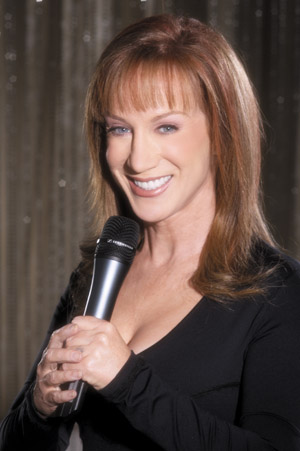 Kathy Griffin says she'll do just about anything to get media coverage in hopes of propelling her from Hollywood's D-List to its A-List. Since August 2005, her reality TV show, Kathy Griffin: My Life On The D-List, has aired on Bravo, and the second season was nominated for an Emmy Award. She has a taste for reality shows, winning ABC's Celebrity Mole and hosting NBC's Average Joe and MTV's Kathy's So-Called Reality.

Griffin became a part of America's television pantheon during her four-year stint portraying Vickie Groener on NBC's Brooke Shields sitcom Suddenly Susan. The caustic redhead has since earned a reputation for dishing out the dirt on Hollywood's celebrities as part of her stand-up routine. When she took on Jerry Seinfield in her act, he made her a part of his show as the character Sally Weaver, a fictional character who blasts Seinfeld during her stand-up bit.

Griffin rolls into Lafayette on Friday for a one-night only show at the Heymann Center for Performing Arts. All proceeds from her performance will benefit Stuller Place, which provides assistance to survivors of sexual abuse and assault.

For the uninitiated, Griffin's language can get pretty foul, and her content is geared for adults. And despite all of her claims of being a sub-par celebrity, Griffin must be making her way up Hollywood's social ladder, or at least moving up to its C-List, because Miss Hollywood's handlers declined our request for an interview.

Stuller Place presents comedian Kathy Griffin at the Heymann Performing Arts Center, Friday, July 27, at 8:30 p.m. Doors open at 7:30 p.m., and tickets are $53. All proceeds benefit Stuller Place. Griffin's mature subject matter and language is recommended for a mature audience. For more information about the show or about Stuller Place, visit www.stullerplace.com.