Rare French antiques are only part of the charm of a family's post-Katrina transformation in Lafayette. 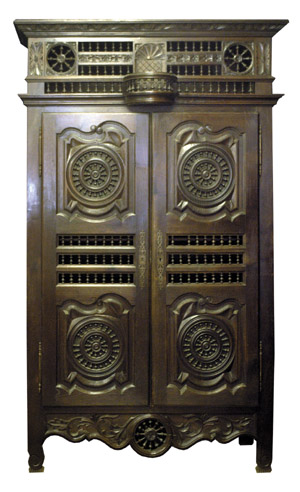 The lucky daughter of a wealthy man in 1870 Brittany would have received an armoire for her wedding dowry. Carved out of massive chestnut planks, such an armoire would have been covered with symbolic decorative motifs which spoke of the history of the northwestern corner of France. "Brittany has a special history," says Edith Alis, owner of Chez Les Francais, where she specializes in French antiques from Normandy, Brittany and Paris.

The residents of the misty corner of France are descendants of the Celtics of Ireland, Scotland and parts of England ' their heritage most strongly preserved in Brittany, as evidenced in an armoire carved more than 1,000 years after the Viking invasion.

Four disks are centered on the doors, the representation of the Viking wheel or circle of life. A little niche high up on the 6-foot armoire is designated as the home of a statue of St. Anne, patron saint of Brittany. It's an exquisite and rarely seen type of armoire here in the land of Louisiana native cypress or French provincial pieces.

Alis' shop on Guilbeau road has been located here in Lafayette only a year. Edith, her husband, Hasan, and son Guillaume relocated from Donaldsonville, after their shop there suffered from a dearth of customers and tourists post-Katrina. "Here, the people love to speak French," says Hasan, a French immersion teacher in Cecilia. A native of Turkey before he lived in France, the Alis' shop offers Turkish rugs, jewelry, and seductive sweets like Turkish delight. Edith's loves ' handmade bobbin lace and Limoges china ' are also evident in the shop. But it's the furniture, ornate tables, chairs, buffets and armoires from northern France that are the star of the show.

Guillaume Alis also has his own business under the same roof. He builds electric and acoustic guitars out of exotic woods, repairs instruments in his guitar hospital and is part of the French music scene here in town. If the treasures inside were not reason enough to pay a visit, immersing oneself in language certainly is another. The Alises love speaking their native French as much as they do extolling the pleasures of their adopted home. Stepping into the shop is like stepping through the magic doors of the wardrobe into Narnia and the Turkish delight will keep you coming back for more.