Project HEAL thanks Acadiana with a second-line parade and jazz funeral. 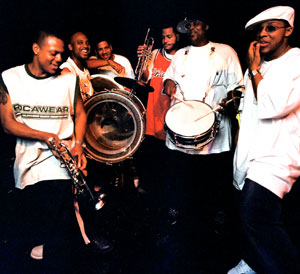 It only took one week after Hurricane Katrina hit Louisiana for Project HEAL to come together. Co-founded by the Acadiana Arts Council and Matthew Goldman, the displaced press and advertising director for the New Orleans Jazz & Heritage Festival, Project HEAL (Helping Employ Artists Locally) set out to hire evacuee artists in Acadiana. Utilizing grants from Lafayette Consolidated Government and fundraisers such as the Sept. 10 Band Together concert, Project HEAL raised more than $50,000 and has employed more than 100 musicians, storytellers, actors, and other artists.

Now Project HEAL and AAC are showing their appreciation for Lafayette's support with a full-scale New Orleans second-line parade and jazz funeral beginning at 8 p.m. Saturday, Nov. 12, immediately following ArtWalk. Fiery contemporary Crescent City brass band The Soul Rebels (pictured) will lead the procession down Jefferson Street, followed by members of various New Orleans Social Aid and Pleasure Clubs. Second lines are a century-old tradition born out of New Orleans and have no ties to Mardi Gras. "It's not a parade that you watch, and there are no costumes or beads," says Goldman. "It's a parade that you participate in." Residents are encouraged to bring instruments and handkerchiefs and second-line with the band. Following the parade, the Soul Rebels will keep the party going with a performance at 307 Downtown.

The second-line parade begins at the Acadiana Center of the Arts (101 W. Vermilion St.) at 8 p.m. For more information on Project HEAL, call 233-7060 or email [email protected].