Jefferson Street has long been a popular nightlife destination, but two newcomers are looking to make a mark on the outlying edges of Jefferson - ready to offer something different to the neighborhood. Before you roll your eyes and think, "Oh great, another night club," think again. In mid-October, two sets of entrepreneurs will bring a different kind of life back to the blocks of Jefferson between Garfield and Cypress streets.

Lindsey Tharpe and Jackson Nevitt both have a passion for Lafayette and local products. The couple is opening Astra Modern Market at 200 Jefferson St. with a vision of providing local produce, farm fresh eggs, fresh flowers and artisan-crafted goods - picture a farmers' market open all day in a space with contemporary lines, an urban edge and natural light that floods the building to showcase goods.

Lindsey Tharpe and Jackson Nevitt's Astra Modern Market opens on Jefferson to meet the neighborhood's need for local produce and other local goods.

And that's just half the shop.

Nevitt, the mastermind behind the second portion of Astra, is crafting a menu of light fare for lunch and dinner. His culinary experience working in restaurants and bakeries inspired him to plan a menu around savory and sweet crepes, salads and other revolving menu 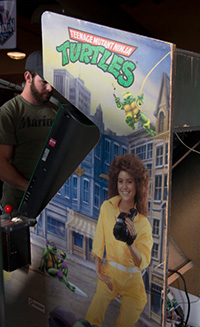 items - Nevitt believes simplicity will make his dishes shine. In the future, the duo hopes to offer inventive late-night offerings for locals looking for a twist on the typical nightlife scene, allowing Astra to create a niche for a different crowd. "We want to be part of a neighborhood. I don't want to just come and leave. We want to put roots [downtown]," Tharpe says. The couple believes the downtown revival can continue with its commitment to meet the need of a market in a neighborhood with few options.

Another downtown destination opening doors soon is Robert Zorn's Arcadian. The collector of retro video games is taking over what once was Guamas at 302 Jefferson St. and is serving up chef-crafted burgers, beer and Ms. Pac-Man.

Will child's play draw in the kids at heart? Zorn says yes. "It's meant to be social, not just an arcade," Zorn emphasizes. While he has favorites like Donkey Kong and Twilight Zone pinball, he's also bringing in giant Jenga and Connect Four and expects patrons to get interactive.

Late night, the restaurant will rearrange the furniture, allowing people to game on and continue to order up eats at the bar until 2 a.m. The "barcade" offers something for everyone; even if video games aren't your thing, the energy Zorn is creating will brighten the block.