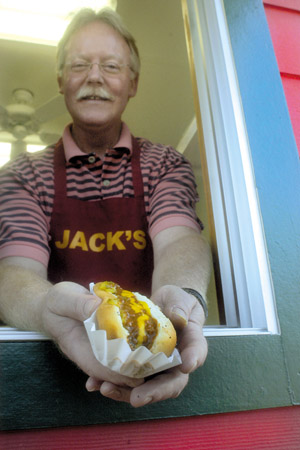 Lafayette's foodie population has developed eclectic tastes. We'll eat sushi while quaffing a margarita, or wash down nachos with South Australian Shiraz, so who's to say that creamy spiced tea from India doesn't match up with a Coney Island special? That's what Don Suggs is betting on with his new Johnston Street drive-thru, Jack's.

The two-story drive-thru has been a curiosity in the downtown neighborhood since the studs went up six months ago. After opening two weeks ago, Jack's is developing a steady stream of customers ' some who are curious about the banner hawking gourmet hot dogs, others who remember a downtown institution, Jack's Coffee Shop.

In the late 1930s, Jack's Coffee Shop on the corner of Vermilion and Buchanan streets was a hot spot for burgers, dogs, chili and beer. The chili developed such a following that when Jack Cutitto sold his business to "Cap" Latiolais in 1939, the chili recipe was an essential part of the sale. Students from Cathedral Carmel and Lafayette High would spend their lunch hour munching chili dogs or turn up after school to play the jukebox. Cap's son Pepe ran Jack's until the early 1960s, when the Oil Center put the quietus on the lunch trade downtown.

Pepe Latiolais went on to become a well-known bartender at LaFonda, and the chili recipe slipped into obscurity until a few years ago when it was given as a Christmas gift to his children, including daughter Diana Maria Latiolais Rodriguez Suggs. "Nobody made the chili except Don," Suggs says of her husband.

On the strength of the chili, Don decided to reincarnate Jack's as a modern drive-thru. His all-beef Vienna wieners are Gourmet magazine's No. 1 choice for good dogs; the spice-filled Polish dogs have a nice bite. Fueling a 21st century addiction, he complements chili with caffeine, hence his list of high octane espressos, the Mexican mocha (a cocoa and cinnamon flavored coffee), and the cardamom and clove scented chai.

Do-it-yourself carpentry by Don placed the drive-thru window a bit on the high side. "No problem," says employee Allison Barron, who will walk your dog to your car if you can't reach. "Just think of us as SUV-friendly."