The enduring appeal of Creole pumpkins. 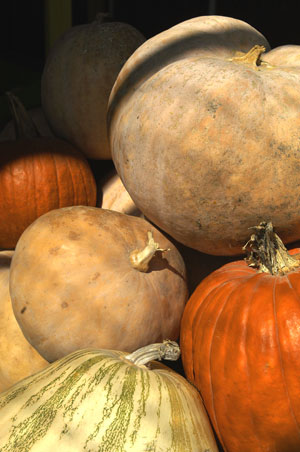 Like local Cajun folklore legends of feufollet (lights in the swamp said to symbolize unbaptized babies) and the boogeyman tataille, Creole pumpkins have an air of mystery. They have very different qualities than their jack-o-lantern counterparts ' they're much fairer in color and odder in shape. Are they a type of gourd? A cross between a pumpkin and a squash? Or is it just a different variety of pumpkin, like Europe's blue pumpkins or California's dark-green varieties?

David Richter with the Dulles Farmer's Market says the Creole pumpkin calls to mind the Creole tomato. "It's a marketing thing," he says. "The Creole tomato is grown by the Creole Tomato Association. It isn't really Creole. There are a jillion different varieties of pumpkin. There's one [variety] that people call Creole, and it's not a deep orange and it's not shaped like a jack-o-lantern."

At The Fruit Stand in Breaux Bridge, Creole pumpkins line a green bin, next to the orange ones. Owner Floyd Foti used to buy them from a man in Maringouin, who has since passed away. This year he got nearly 500 Creole pumpkins from a farmer in the Breaux Bridge/Cecilia area. They sell for about $3.99 each. "I'm one of the last that handles them," says Foti. "They probably originated around the Thibodaux/Houma area, because that's where the majority of them are still located. That's one of the last places where you can see them on the side of the road. There's not that many left ' it's an old seed." Foti says he's familiar with the name "Creole pumpkin" but prefers to call them "old-fashioned" or "pink" pumpkins. "They're pale yellow," he says. "They're not orange at all."