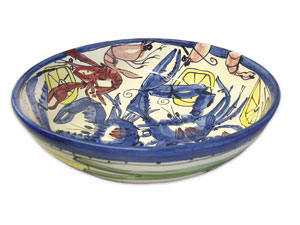 Some people are interested only in food. Others care equally for the china it's served on. So a set of dishes that prompts good cooking makes everybody happy. The Seafood Celebration line of china, designed by Covington artist Tika Hasslock Valis, depicts the iconography of one of Acadiana's favorite dishes ' seafood gumbo ' in vivid and whimsical cartoons.

Valis was teaching art when she created her first design to decorate her husband Steve's pottery. "I fell in love with majolica glazes," she says. Her subject matter comes naturally to the New Orleans native; Valis grew up crabbing and fishing with her family. Her uncle, J.M. Lapeyre, invented a device for peeling shrimp in 1949 that revolutionized the industry.

Growing up in a family of entrepreneurs, the homegrown business comes naturally to her. "The images are a folkloric expression of my personal background," she says. Valis started selling the design in 1991 as original artwork. A divorce convinced her to change her business model, and she licensed the design to a large china company, which mass-produces the line. "Handmade pottery isn't lucrative," she says, "but this particular design sold well as original artwork." The line of china sold so well she developed a second line, called the Seafood Buffet Collection, which incorporates another Louisiana food icon, Tabasco sauce. The image of a Tabasco bottle in the midst of crabs, shrimp, crawfish, speckled trout, oysters, green onions, lemons, garlic and peppers unites the marketing power of McIlhenny Co. with the originality of Valis's design. Valis is delighted with the deal. "I've passed marketing 101," she says. "Now I'm a seasoned businesswoman."

Seafood Celebration and Seafood Buffet Collection can be purchased at Accentrics in downtown New Iberia. Call 367-6880 for more information.