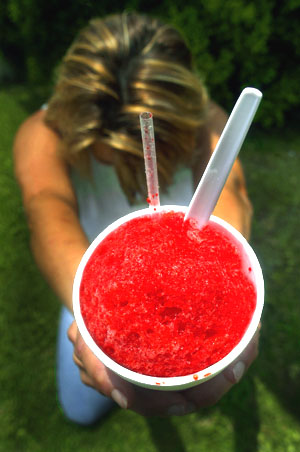 With the mercury topping 90 degrees and summer approaching with a vengeance, the scene outside Cajun Sno gets unruly sometimes. Customers jockey for position, the occasional shoving match occurs and the line snakes all the way out to the road some days. "When they want a sno ball, they want a sno ball, and they're not going to follow the rules," says owner Robin Chevalier. After 15 years, Chevalier thinks she might have to expand to accommodate the summer business. "Traffic gets unbelievable," she says about Cajun Sno's line of cars, which usually extends out onto Rena Drive, behind the Chevron station.

While Cajun Sno is open year-round, summer hours extend from 11 a.m.-10 p.m. (Fall and winter hours are noon-8 p.m. from October-February.) The small purple and white building is primarily staffed with students, and Chevalier preaches patience to her patrons. "We run out and take orders and run sno balls out if people know what they want," she says, and only takes cash or checks. She's also willing to make any flavor, as long as you can tell her what color it is or how it tastes. Even with new cream soda and clear flavors, the basics like wedding cake and strawberry are still the most popular. The stuffed sno balls with ice cream and pink ladies with nectar and cream are also favorites. And as dessert or an afternoon snack, a sno ball isn't too filling. The syrup over the ice is 12.5 calories an ounce, and cream adds another 1.5 calories per ounce. "It's straight sugar," she says.

Chevalier won't tell how many sno balls she sells a day on average, but does go through about 60 blocks of ice a day during the week. She also gets frequent orders from businesses, sometimes for 20 sno balls at a time. Cajun Sno is the oldest drive-thru for sno balls in town; only Olde Tyme Grocery has been selling sno balls out of its restaurant longer. Chevalier tried opening a second location on Verot School Road a couple years ago but couldn't manage both. "You have to be here," she says. "It doesn't stop until 10 p.m. The line will be down to the road at 10. When school lets out, it'll be even worse."