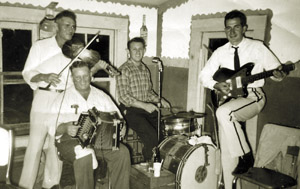 In 1984, Tina Pilione had just migrated to Louisiana from Seattle when she discovered Maurice Berzas & The Mamou Playboys holding down the Saturday night slot at Snook's. She knew it was music that needed to be preserved and recorded their performances on cassette tapes with her Sony Walkman. In the 1960s and 1970s, Maurice's son Vorance ' the band's drummer ' taped the band as well. In addition to a couple 45s, these are some of the few recordings of the Cajun band that once dominated the Cajun prairie dance hall circuit.

Vorance allowed Pilione to copy his tapes and Joel Savoy of Valcour Records converted them to digital files. This week, Pilione releases Live at Snook's, a two-volume set of the band's classic recordings. "It's not a slick recording quality sound," Pilione says. "It's how it would sound in the dance hall, which is what I like."

Maurice Berzas died in 1985, and the band dissolved. Vorance retired from performing for a year until Dewey Balfa convinced him to begin playing again. With Balfa, Vorance shared the stage with a budding young accordionist ' Steve Riley. When it came time for Riley to start his own band, he took the Mamou Playboys mantle.

This Friday, June 15 at Blue Moon Saloon, Riley and his Playboys join Pilione, Vorance and special guests for a performance of the vintage Playboys material and to perform a set of their own. The record sheds light on the original Mamou Playboys by capturing their renditions of dance hall favorites ("Evangeline Special," "M & S Special," "Grand Mamou,") and lesser-known gems ("Ville Platte Waltz," "Choupique Waltz").

During the peak of their career, the Playboys performed seven times a week. Saturdays they played KVPI's afternoon radio show, plus two separate dancehall gigs. Sundays offered no rest, with an afternoon and night dance in Basile. In the mid-50s, the Playboys reduced their load to about four shows a week. In Ville Platte, the band held the Saturday night slot at Snook's for 35 years. Despite the tremendous schedule, The Playboys never ventured outside of the Mamou, Basile and Ville Platte area, as Maurice was a tenant farmer and did not want to be far from his crops. Likewise, recording was not a priority.

"I wish he would have wanted to make more (records)," says Vorance of his father. "He was satisfied playing locally, playing dances."

Pilione's glad to make these rare recordings available. "Projects such as these are not ever going to be big sellers, will not draw the interest of big labels, but that is not the point," she says. "My projects don't have to make me a fortune, they just need to be presented to those who want to experience a little of the Cajun scene as it was 20 or so years ago. I think it is really important for people to know who Maurice Berzas and the original Mamou Playboys were and what great music they made."

Steve Riley and the Mamou Playboys and members of the original Mamou Playboys play a CD-release party at 8 p.m. Friday, June 15 at the Blue Moon Saloon. Admission is $10.