Despite a press release to the contrary, some Whole Foods center tenants aren't confirmed. C'mon Ainbinder, what kind of operation are you running?

On Thursday at about 4 p.m. a much-anticipated press release arrived in Lifestyle Writer Kari Walker's inbox. The Ainbinder Company, developer of the Whole Foods-anchored Ambassador Crossing Shopping Center at Ambassador and Settlers Trace, announced seven new tenants it said had "committed to the project." (When we read "committed," we think lease signed - not still negotiating or letter of intent, which merely expresses both parties' intent to enter into a lease agreement.)

Michael Ainbinder, chairman and CEO of the company, told ABiz in early September that he would be announcing tenants within 90 days. At the time, addressing a question about whether he had a letter of intent signed with J. Crew, he said he did not comment on LOIs. (Those deals often fall through for any number of reasons.)

As any of you local readers know, we've been hot for Whole Foods for years, having broken the story that it would locate in old Kmart shopping center on Ambassador Caffery, only to have to retract what turned out to be a faux announcement put out by Dan Muniza, vice president for construction and facilities management for Fidelis Realty Partners, the Houston-based redeveloper for the site. It turned out that there wasn't even an LOI with Whole Foods, much less a lease.

We put in multiple calls to Lee Michaels before posting the story online but didn't immediately hear back.

So Kari and I send the breaking news out Thursday afternoon, throttling, as you might imagine, our Google Analytics throughout the weekend. 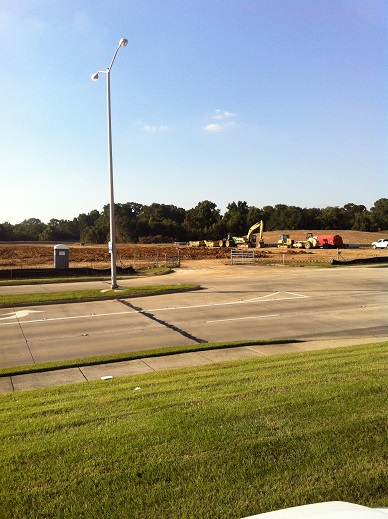 Work is well under way on the Ambassador Crossing Shopping Center, but the tenant mix remains a mystery.

Then, Sunday afternoon, depressing reality started to sink it. Had we all been taken for a cruel ride yet again? "I would suggest that it's totally speculative," Chipotle tweeted when asked by a follower about a Lafayette location. "Unfortunately landlords do that all the time to try to get others to buy in."

Say what? I've been in this business for more than two decades and can't - certainly not off the top of my head - recall a single incident when a legitimate developer falsely claimed he had specific commitments (save for the aforementioned Whole Foods lie.) Developers don't like to be embarrassed by a deal falling through and are typically hesitant to disclose a tenant until there is a lease, though some will discuss the potential of deal when they have an LOI. But they always make it clear the deal is not done.

Fearing the worst, that this was yet another Whole Foods leasing debacle, Monday morning we again called Lee Berg of Lee Michaels Fine Jewelry, which has a location in the Acadiana Mall. Bad news for fine jewelry lovers hoping for a little easier access to Lee Michaels: "We have not signed a lease with Ainbinder," Berg tells ABiz, noting he had no idea an announcement was going out last week. "We've been in discussions for six months, but at this time nothing is signed."

Berg, who confirms that he does have LOI with Ainbinder, says what's under consideration is a pad site (freestanding) of approximately 6,000 square feet in front of Whole Foods. He declined to elaborate on the status of the negotiations and would not comment on how a potential new store would affect the Acadiana Mall location.

"I think it's jumping the gun a little bit," Berg says of the press release.

We also contacted Chipotle's corporate office in Denver, Colo., and a spokeswoman confirms it, too, has no lease at Ambassador Crossing. "I will reach out to the developer and learn more," Danielle Winslow writes in an email response.

We reached out to The Ainbinder Company about the snafu via email and also put in a call to the leasing contact, Shaw MacIntyre, listed on the press release.

Ainbinder, through company rep Jewell Bradford, said of Chipotle: the "lease is not signed yet but they are coming."

No word yet from Ainbinder on Lee Michaels.

At this point, we're just hoping we are indeed getting a Whole Foods.