The Red Stick Ramblers throw a weekend-long party of music, cooking and camping at Acadian Village. 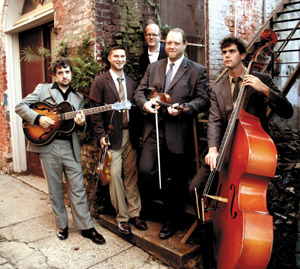 The idea for the South Louisiana Blackpot Festival and Cookoff originated in the Catskill Mountains of New York. Glenn Fields, drummer for the Red Stick Ramblers, says the group was playing for one of Jay and Molly Ungar's Ashokan music camps when Jay suggested the Ramblers start their own festival and camp in Lafayette.

Fields contacted Acadian Village about the idea. "They were really enthusiastic about us having the festival there," he says. "Then I started calling all my friends with bands, seeing if they wanted to come do it. Everybody was into it. The idea is to get people camping so that at night they can jam with the musicians that are there. That's when songs get tossed around, and people learn this stuff."

Fields had no problem getting local bands to sign up for a weekend of music and food. The debut lineup features a dozen groups ' including the Ramblers, the Pine Leaf Boys, the Lost Bayou Ramblers and Ann Savoy. Fields' Rambler bandmate Linzay Young suggested the black cast iron pot cookoff angle, and Pine Leaf accordionist Wilson Savoy proposed an accordion contest. Chef Pat Mould is assembling a panel of judges for the cookoff, and Savoy is enlisting the help of Steve Riley, Ray Landry and Harry Trahan to judge the winner of the accordion contest.

And while this year's musical lineup is a bit Cajun-centric, next year Fields hopes to showcase different styles of music from the South, not just south Louisiana. "I'd like to do a little bit more blues and some country and western, just mix it up a little bit but still have a strong Cajun music presence, but with everything that influences the music around here."

The South Louisiana Blackpot Festival and Cookoff kicks off at 8 p.m. on Friday, Nov. 10, and continues through Saturday night at Acadian Village, 200 Greenleaf Drive, Lafayette. Admission is $10 on Friday and $15 on Saturday. Children under 12 are admitted free, and camping and parking are also free. Tent camping is allowed and encouraged, and RV hookups are available on site, but no pets are allowed. For more information, including a complete list of bands and performance times, visit www.blackpotfestival.com.