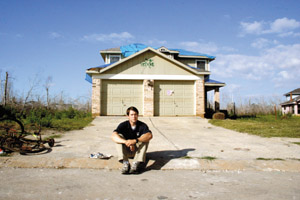 Lafayette is typically the last stop along any showcase tour for new independent films, video games, or cutting-edge art and animation. But this week at least, that's not the case, as the inaugural International Digital In-Development Expo kicks off with a full schedule of movie screenings, as well as panels and exhibits on film, animation, video games and more.

The common thread is that all works on display, to some extent, are still in development, ranging from completed films that are seeking distribution, to short films and a video game project that is still in its infant stage.

The four-day festival includes screenings of almost 20 short films, along with a half dozen features. Events begin Monday night, May 7th, with the Louisiana premiere of When a Man Falls in the Forest, scheduled for 6:30 p.m. at Broussard's Celebrity Theatres. Starring Sharon Stone, Timothy Hutton and Baton Rouge native Pruitt Taylor Vince, the film has recently been making the rounds at South By Southwest and the Berlin International Film Festival ' where it was nominated for Best Film ' and is scheduled for national release in August. All IDIDX events are free, with seats available on a first come, first serve basis.

From Tuesday through Thursday, IDIDX will be headquartered in the Cajundome Mardi Gras ballrooms for movies and other presentations while an IDIDX exhibitors' tradeshow takes place in conjunction with the TechSouth conference in the Cajundome Convention Center.

Thursday night, the Celebrity Theatres hosts another Louisiana premier, for the film Low and Behold, an official selection at last year's Sundance film festival. Directed by Lafayette native Zack Godshall, and filmed in New Orleans the year after Hurricane Katrina, Low and Behold is a part scripted, part documentary coming-of-age story about a young man working a new job as an insurance adjuster in the chaotic climate of post-Katrina New Orleans.