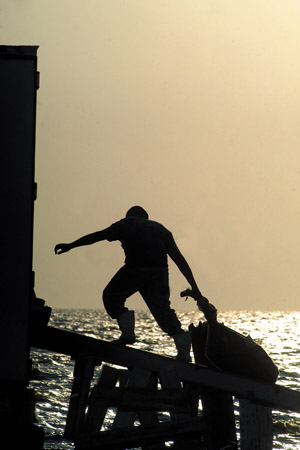 Cypremort Point has made a remarkable recovery eight months after Hurricane Rita pushed a huge storm surge and mountains of mud into the resort community. Houses now sparkle with crisp new paint, lawns previously filled with debris are now cleared and manicured, and sailboats rock in the slips of the Cypremort Yacht Club.

"People are back," says yacht club Harbormaster Barry Innes. "There's greater activity every weekend." The spring sailboat racing season started in March and will culminate with a Memorial Day race May 27.

Shrimp boats and oyster luggers, a reminder that Acadiana's bayside playground is also a working fishing village, dock every evening to unload their catch. Approximately 1,200 sacks of oysters raked up in Southwest Pass and in the shallow waters of the Gulf of Mexico are unloaded every day at the Point. Oystermen will sell a sack right off the boats for about $30.

On weekends, the waters of Vermilion Bay are beginning to fill with recreational fishermen and playboat aficionados. The public dock is open, and the Bayview ' the legendary bar at the end of the world ' has ice and fuel for sale. Hammers ring at the Bayview, where the Parker family hopes to have the breezy porch enlarged threefold, the store stocked, and beer and burgers on sale by July 4. For those who like to sleep to the sound of waves on the shore, the six cabins at Cypremort Point State Park offer respite. (The beach is still closed pending repairs of beachside shelters and bathhouses.)

There is plenty of evidence of the ravages of Rita. Some boathouses sag, piers still need to be replaced, and the road out to the Bayview is as rife with potholes and moguls as a motocross course. But the Point has always been a gritty sort of resort, and those seeking their limit of speckled trout or the perfect spot for a sunset barbecue are undaunted by a little adventure. "It's not Miami Beach," says resident "Tac" Taquino. "It's the Point."