The Soweto Gospel Choir brings sweet harmonies and awareness of the HIV/AIDS epidemic, while inspiring "Get Up, Do Something Day" in Lafayette. 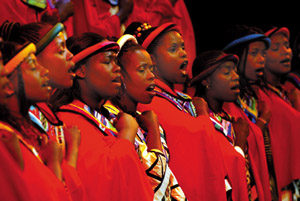 On April 22, when the Soweto Gospel Choir performs for the Performing Arts Society's season finale, the group will bring more than 25 voices, a four-piece band, drummers and dancers to the Heymann Performing Arts stage. It'll also bring a message about HIV/AIDS and its devastating effects. That combination of music and activism has already inspired local organizations to explore Lafayette's connection to the great HIV/AIDS epidemic and its roots to Africa's music.

Hailing from Soweto, the South African ensemble is compromised of the city's best talent, plucked from the choirs of Soweto's churches. The group has backed musical legends like U2, Queen, Peter Gabriel and the Eurythmics and performed for the likes of Archbishop Desmond Tutu and former U.S. President Bill Clinton.

The Performing Arts Society of Acadiana's Apiyo Obala says of the choir, "In addition to being entertainers, they are also global ambassadors for Nelson Mandela's 46664 Foundation, which was created specifically to raise awareness and money to fight against AIDS in Soweto. HIV & AIDS affect everyone globally, but the highest majority of people who are affected live in the Soweto township of South Africa."

Partnering with the Southwest Area Health Education Center and the Africa Diaspora Heritage Committee, PASA presents "Get Up, Do Something Day," a day to raise awareness about HIV/AIDS and its effect on the Acadiana community. On Saturday, April 21, at Parc Sans Souci in downtown Lafayette, there will be a community health fair, live entertainment featuring local artists as well as step teams from Northside and Comeaux high schools. The event will also feature a teen panel discussion with a focus on HIV/AIDS and other problems facing Acadiana's youth. Free and confidential HIV/AIDS testing will be also available on site, as well as 30 different community organizations. Obala says that since the hurricanes of 2005, Acadiana has seen a surge of new residents. "There's even more of a need now to educate and make people aware of the resources that are available to them within their community," she says.

But the day of events will do more than focus on just HIV awareness. "There's another ongoing theme of a cultural connection to Africa through music," Obala says. "It's going to raise awareness about HIV/AIDS, but there's also going to be a music panel discussion that will include local artists like Marc Broussard and Roy Anthony. They're not only going to talk about African music and how it's influenced their music, they're going to also perform selections from their own repertoire that demonstrates what the panel's discussing. We just thought this would be a great way to expand what PASA normally does with its outreaches, like master classes and workshops. We do entertain, but another focus of ours is education and awareness. It was a chance to do something different but that has a direct impact on the health of our community."

The Performing Arts Society of Acadiana closes out its season with a live performance by the Soweto Gospel Choir at the Heymann Center for the Performing Arts on Sunday, April 22, at 7:30 p.m. Tickets are available through Ticketmaster, online at www.pasa-online.org, or by calling (337) 262-8686. "Get Up and Do Something Day" will be held Saturday, April 21, at Parc Sans Souci in downtown Lafayette. For more information, call (337) 237-2787. The event will raise awareness about HIV/AIDS as well as African music and its influences on American music. The community health fair will also include panel discussions and offer free HIV/AIDS testing.