The spookiest ball of all

The Vampire's Ball is one of my favorite soirees about town. Like a giant costume party for grown ups, it's hands down one of the most fun. Where else can you see a respectable doc as a Day of the Dead saloon girl alongside a Unitech founder as a ghostly bride right by some dude dressed as Ted? And bonus - all the money raised goes to The Children's Shelters. So last weekend I headed out to River Oaks to see just what kind of shenanigans would be afoot when Deanna Head brought together the Day of the Dead Casino to Vampire's Ball.

In a first, I didn't dress spooky (to be honest it was a two party kind of night and the first party would've been a bit awkward if I rolled up with fangs on). But, there were plenty of other cocktail dressed gals. There was the always beautiful Many Grayson who was fab in reptile print and Hanna Herrington Lavergne who was perfect in a black dress and killer wrap (she, too, hit both parties) while Stephanie Collins was a beaut in a rosy cocktail dress - so demure. But, there were even more amazingly spooky gals and gents starting with organizer Nicole Lopez who greeted me at the door in a beautiful dress of black and merlot with half a face donning Day of the Dead skeleton makeup. 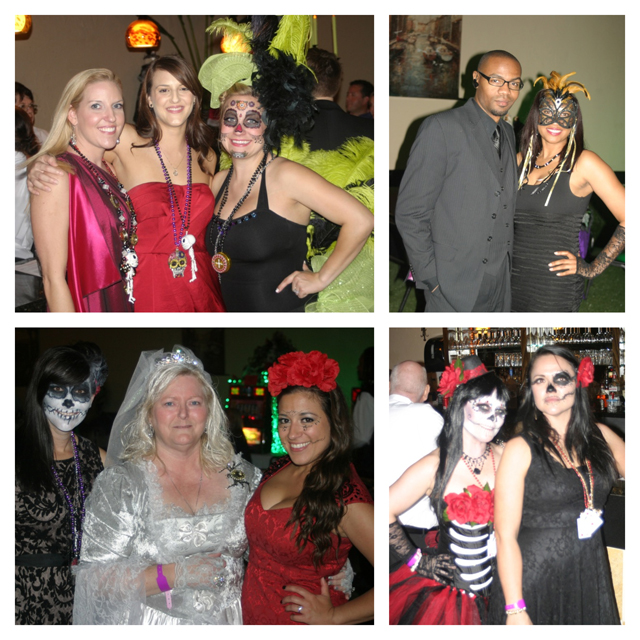 Deanna Head outdid them all as a spooky bride and we loved Shaquana Lewis in a chic black dress, lacy gloves and sexy mask with the best accessory of all - her sharp dressed (IND Style winning) man JD Mosley. Sara Moss was a beauty with dark lips and Dr. Michele Carr was on another level in her red and black Day of the Dead ensemble. There was a pirate and a creepy marionette and more feathers than I could shake a tail feather at. But, the most feathery of them all - the outrageous Miles Cormier in a Native American outfit and head dress that would put Pocahontas to shame. And to think Halloween is still nine days away. Enjoy the inspiration in our Vampire's Ball album on Facebook.