Two Lafayette plays are chosen for a New York arts festival ' now they need the funds to get there. 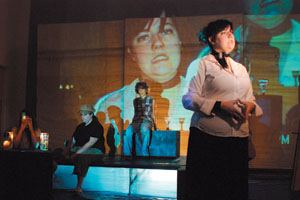 In August, when the curtain goes up at the New York International Fringe Festival, North America's largest multi-arts festival, some 200 productions will take the stage. Out of 1,000 applicants, two were picked from Lafayette. Now Life/Play and Sustained Winds must fund their way to the event in order to represent the Hub City's growing theater scene.

Sustained Winds tells the stories of hurricane victims, written and performed by New Orleans and Lafayette artists from a range of disciplines. "Because it's New York City, they work to get a lot of industry people in to see the shows: producers, etc.," says Amy Waguespack of Acting Up, the company behind Sustained Winds. "Mostly, we just want to remind people that southern Louisiana is not fully recovered."

For Daigle, the trip comes on the heels of being named Cité Des Arts' new artistic director. Previously, he taught at the theatre program for the Lafayette Parish High School Arts Academy. When Cité offered him the post, he was eager to give back to the venue where he has premiered seven full-length pieces. One of them was Feminine Side, which he'll revisit for his trip fundraisers. The play explores gender identities, with Daigle taking on several perspectives, including black drag queen, a Jewish grandmother, and, for the first time, a lounge singer.

Daigle got the idea for his Life/Play after seeing Suzan-Lori Parks' 365 Days/365 Plays, which featured a play written for every day of the year. Daigle adapted the play-a-day concept to his own life, turning his autobiography into an ongoing play. By blogging it online, he's giving the audience a chance to have a hand in its development. New parts will be added all the way through the New York experience.

"It's constantly evolving," says Daigle. "I find that exciting. It's a writer saying, here you go, here's my life, connect to me if you can."