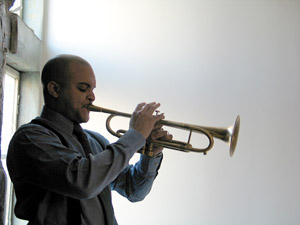 Irvin Mayfield has been compared with traditional New Orleans trumpeting icons King Oliver and Louis Armstrong and even with his contemporary and mentor Wynton Marsalis. But his sound is distinctly and undeniably his own. He's played with everyone from Quincy Jones to Ani DiFranco, and in his Latin-soaked band with percussionist Bill Summers, Los Hombres Calientes, Mayfield was awarded Billboard's Latin Music Award for Contemporary Latin Jazz Album of the Year in 2000.

But the New Orleans native and graduate of the New Orleans Center for the Creative Arts is perhaps at his best when he's doing his own thing. And when he rolls into Lafayette next weekend with his New Orleans Jazz Orchestra, he'll be doing just that. Mayfield formed the group in 2002 and serves as the 16-piece, nonprofit band's artistic director.

In 2003, Mayfield released his first recording with NOJO, along with the Dillard University choir. Strange Fruit was inspired by Billie Holiday's haunting 1939 song of the same name whose subject was lynching in the South. The New York Times wrote: "Despite the ugliness of its theme, the music to this new Strange Fruit has only a few sad interludes. It is full of swirling, heavily orchestrated crescendos and passages that swing with life."

Mayfield and NOJO are steeped in the rich tradition of New Orleans jazz and the evolution of the homegrown sound, which is showcased in their presentation of New Orleans: Now and Then. The performance highlights New Orleans jazz's cultural significance to American culture while reminding audiences "that jazz is the most democratic form of artistic expression."