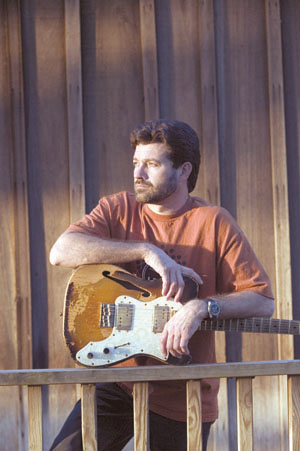 Highway 90 has served Tab Benoit well. The 38-year-old Houma native is Louisiana to the core, a diehard sportsman who's lived on the bayou his whole life and uses his fishing camp as his primary songwriting spot. And he's a spirited musical traveler as well, frequently heading east to the Crescent City to jam with heavyweights like bassist George Porter Jr. and motoring west to find inspiration in swamp-pop anthems like Lil' Bob & the Lollipops' "I Got Loaded." Since his 1992 debut album Nice and Warm (which sparked a number of flattering but misguided comparisons to Stevie Ray Vaughan), Benoit's steadily toned down his early blues-rock leanings and become a musical sponge for indigenous Louisiana rhythms. He's incorporated chugging zydeco licks into his percussive staccato guitar lines and gotten progressively funkier in recent years, collaborating with Cyril Neville on the recent Voices of the Wetlands CD.

Benoit's new CD, Brother to the Blues, is a tip of the hat to country music's role in Louisiana music history. Joined by fiddler Waylon Thibodeaux, alt-country singer-songwriter Jim Lauderdale and legendary Texas renegade Billy Joe Shaver, Benoit evokes memories of the Louisiana Hayride radio show by putting his stamp on Hank Williams' prison lament "I Heard that Lonesome Whistle Blow," Lauderdale's "I'm On Your Side" pledge and the last-call pathos of the title track. It's all tied together by Benoit's bayou syncopation, best exemplified in the swampy groove of "Moon Comin' Over the Hill" and the dance hall tribute "Can't Do One More Two Step." With Brother to the Blues, Benoit offers a soulful reminder that blues, country, funk and R&B are close musical siblings in Louisiana.