According to LTC Chair Robert Shreve, the Governor's Technology Awards is a cooperative program that recognizes technological advances impacting the state's economic growth.

The Growth Company/Organization of the Year Award is presented to a company that demonstrates significant rate of growth over past year. Growth rate can be demonstrated in revenue, products and services sold, and/or number of employees. Information technology firm GDS, which ranks No. 35 on ABiz's list of the Top 50 Privately Held Companies in Acadiana and has almost 100 employees, generated $50 million in revenues last year, a 19 percent increase over 2011.

GDS also recently announced that it has completed Phase 1 construction of its new permanent corporate headquarters in Lafayette - the company also has offices in New Orleans, Baton Rouge and Houston. Phase I of the facility, located in LEDA's Northpark at the intersection of I-49 and I-10, houses three satellite teleports and a Tier 4 datacenter. The company plans to complete Phase 2 construction, its corporate offices, in late spring/early summer of next year.

"Growth is at an all-time high for us right now," says Ned Fasullo, GDS' chief marketing officer. "Growth in service offerings, growth in facilities and growth in employee base in all four of our markets. GDS is investing heavily in its footprint in the state of Louisiana. ... [we] have 12-plus open positions we are recruiting for and expect hiring to continue through 2014 at around five to 10 new hires per quarter based on current growth projections." 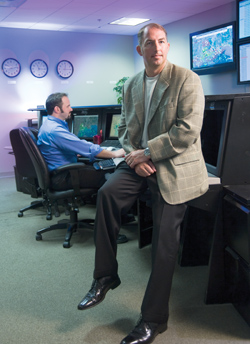 Savoie was honored for several UL Lafayette technology-based achievements under his leadership. They include creation of a Center for Visual and Decision Informatics, faculty development for online teaching and the launch of an Enterprise Resource Planning system.

UL notes that the National Science Foundation recognized its CVDI as the nation's only NSF Center of Excellence in the area of "big data." CVDI is the first such NSF center in Louisiana and is one of only 17 NSF-funded centers in computer science. UL Lafayette partnered with Drexel University to create the CVDI.

"The university's reputation as an innovator in computer science education and research dates back to 1962, when we offered the nation's first master's degree in computer science. Our recent NSF designation recognizes that we've stepped up big data' research in a big way," Dr. Ramesh Kolluru, interim vice president for Research at UL Lafayette, said in announcing the Oct. 28 award. Kolluru accepted the award on behalf of Savoie, who was unable to attend the ceremony.

The university also said it has launched an Enterprise Resource Planning system and has begun implementing academic analytics software to improve strategic decisions and reduce costs.