In the developing U.S. Senate race between Bill Cassidy and Mary Landrieu, wooing new voters has become just as important as keeping old ones.

In the developing U.S. Senate race between Bill Cassidy and Mary Landrieu, wooing new voters has become just as important as keeping old ones.

Lafayette oilman Mike Moreno hosted a function from his home in River Ranch a couple months ago and raised more than $80,000 for the re-election campaign of U.S. Sen. Mary Landrieu, a New Orleans Democrat. One Acadiana politico says it was heavily attended by energy players like Mark Miller, owner of Merlin Oil and Gas, among others. 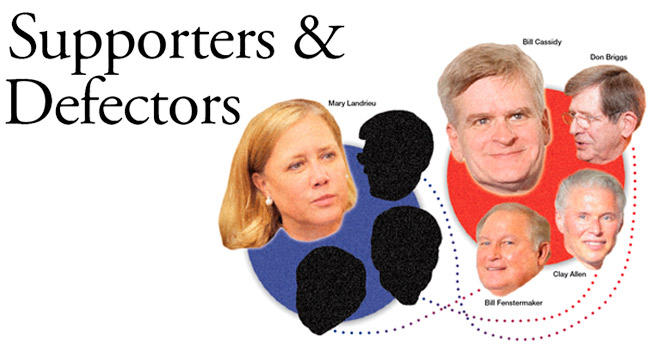 Prominent Republicans Don Briggs, Clay Allen and Bill Fenstermaker, who supported Democratic Sen. Mary Landrieu for re-election in 2008, are now all in for Republican U.S. Rep. Bill Cassidy of Baton Rouge in 2014. Thus far, Cassidy is Landrieu's lead challenger in her bid for a fourth six-year term.

Moreno, however, saw some competition for his chosen candidate just down the street - literally - earlier this fall when Gus Zepernick, CEO of Marlin Energy, put together a fundraiser for U.S. Rep. Bill Cassidy, R-Baton Rouge, the incumbent's lead challenger so far on the 2014 ballot. The next door neighbor co-hosted the event with a large group, including Clay Allen, managing partner of Allen & Gooch law firm; Bill Fenstermaker, CEO of Fenstermaker; and Don Briggs, president of the Louisiana Oil and Gas Association.

Aside from the neighbor-vs.-neighbor intrigue, some of the names jumped off of the Zepernick invite, many of them having supported Landrieu during her last election. "For starters, Bill is a friend of mine," says Fenstermaker. "I also think both of them will vote the same way on oil and gas issues, but Bill will vote more in the way that I think on all other issues."

Allen offers a similar explanation for why he is swapping out political horses. "[Cassidy, a physician] is a policy expert, and I don't think 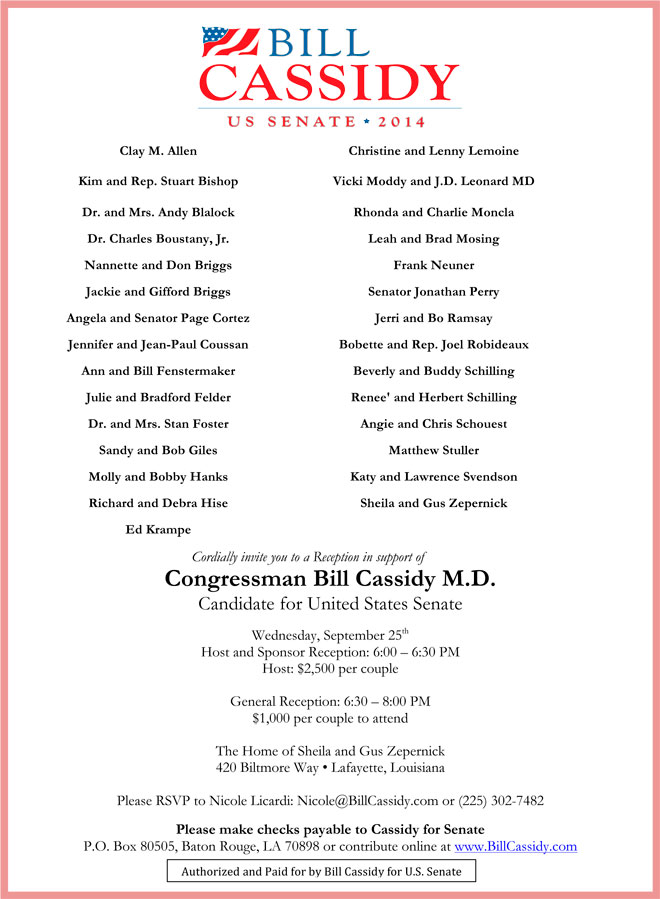 the federal government got that right," says Allen. "On spending and the debt, he's not polarizing. I think Mary Landrieu is following a partisan line at this juncture, and I don't think that's good for Louisiana."

Regionalism plays into Allen's decision-making as well: "Bill is from Baton Rouge. I think it'll be good for central and north Louisiana to have a U.S. senator who isn't from the greater New Orleans area."

Briggs did not comment for this story, but the inclusion of his name on the invitation, plus the fact that campaign finance records on file with the Federal Election Commission show he is donating money to Cassidy this cycle, and not Landrieu, speaks volumes. Just six years ago, Briggs was co-hosting a fundraiser for the incumbent.

"Sen. Landrieu has deep support in the oil and gas community," counters Adam Sullivan, the senator's campaign manager, "having already raised this cycle nearly as much as she raised total during her 2008 election. And the simple fact remains that Sen. Landrieu out-raised her nearest opponent 2-to-1 last quarter."

Allen and Fenstermaker - the latter has contributed $5,000 to the senator this cycle - also backed Suzie Terrell, the former and last of Louisiana's election commissioners, in 2002 when Landrieu won with 51 percent of the vote. Both men say they got behind Landrieu six years later, in 2008, because they weren't impressed by her main GOP opponent then, Treasurer John Kennedy. Landrieu won that election, too, besting a field of four in the primary to carry 52 percent.

Landrieu appears stronger regionally if you look only at campaign finance figures. So far, she has raised $534,000 this cycle from the Acadiana region, including the third quarter of this year, according to the FEC. Cassidy, meanwhile, has raised just $134,000 locally, not including his third quarter tallies, which have not yet been made public. A request was sent to the Cassidy campaign asking for those numbers, but they were not provided.

Mark Miller is among the oil and gas executives from the Lafayette region standing by Landrieu, who is seeking her fourth six-year term. He contends the fundraising numbers show there is strong support and that boosters from other states are flocking to her campaign because she has a decent shot at becoming the Senate's energy chair next term. "You know, Louisiana ranks last in almost every category in the U.S., but we're No. 1 or 2 consistently in energy," Miller says. "If she becomes chairman, she could take the lead on legislation that will be very important to this state."

Other prominent businessmen from the region who have donated to Landrieu this cycle include Bill Doré, who funded Rick Santorum's 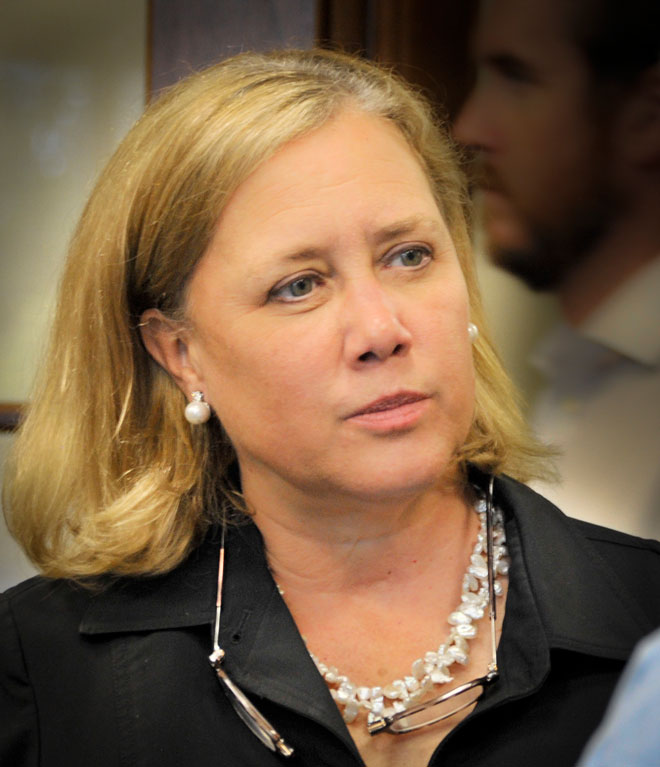 Super PAC during the 2012 presidential primary; Josh Pellerin of Lafayette, the CEO of Pellerin Energy Group; Luke Kissam, CEO of Albemarle; and Bryan Hanks of Lafayette, CEO of Beta Land Services. Supporters also point to Lockport businessman Boysie Bollinger, who has publicly endorsed the senator, along with New Orleans real estate magnate Joe Canizaro. Bollinger, for what it's worth, has served as a delegate to every Republican National Convention since 1976.

Joel DiGrado, Cassidy's campaign manager, says support from the Cajun Heartland for the Republican frontrunner is undeniable. "We believe that, each day, Louisianans see that Mary Landrieu has grown out of touch with Louisiana - rubber stamping President Obama's flawed agenda 97 percent of the time," he says. "Rep. Cassidy wants to represent Louisiana's values in the U.S. Senate and return a culture of accountability back to Washington."

Looking at the race from above, both of the frontrunners seem to be fending off attacks related to their own parties. Landrieu is having to explain her relationship with the president, while Cassidy is being forced to deal with the right wing of the Louisiana GOP, parts of which feel he isn't conservative enough. And although Cassidy stuck it out with conservatives during the government shutdown, the carping from the right has grown louder as two state Republican lawmakers have expressed interest in joining the field against Landrieu: Reps. Alan Seabaugh of Shreveport and Paul Hollis of Covington. 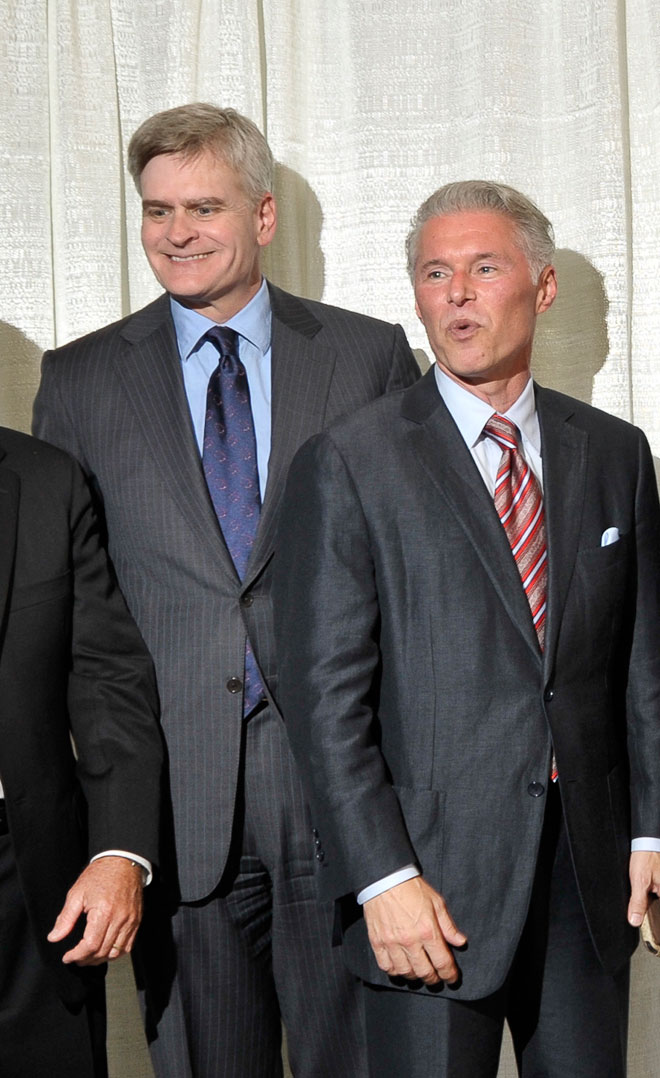 But Cassidy supporters point to the candidate's $3.4 million in the bank (compared to Landrieu's $5.8 million) and his extensive organization building to say that he is the one serious challenger to the incumbent. The only other declared Republican candidate is Rob Maness, a retired Air Force colonel from Madisonville who has reported raising $100,000 in six months and has garnered a few notable Tea Party endorsements.

In a contest that clearly has several layers, it's uncertain if campaign finance accounts will trump endorsements and friends, as they usually do. But in any federal race, one can be just as important as the other. For Landrieu, this will be another in a long line of hard-fought elections, while Cassidy is facing the only real competitive race of his career.

To be certain, both will need friends and supporters, even though at the end of the election cycle it will be their names alone on the ballot.