Wins breed exodus for successful coaches like Mississippi-born and -bred Mark Hudspeth, but Cajun fans can probably relax for at least a couple more years.

Magnolia State of Mind?
Wins breed exodus for successful coaches like Mississippi-born and -bred Mark Hudspeth, but Cajun fans can probably relax for at least a couple more years.

The first 10-win regular season. The first sole conference championship since the Ragin' Cajuns won the Gulf South Conference in 1970.

Three consecutive winning seasons for the first time since 1987-89 when UL went 6-5, 6-5 and 7-4. A third consecutive bowl game after 40 years without one. At press time, all of this awaited the UL football team and its fans - the year 2013 poised to be the high water mark of the Cajun Nation.

It's a new feeling for Ragin Cajun fans and comes with a new worry: Coach Hud, the man most responsible, might leave. In past years Cajun fans worried more about how and when to show their coaches the door. Since at least Russ Faulkinberry (1961-73) every head coach has resigned under pressure or been fired. Only one of the six coaches even continued to coach football: Rickey Bustle is currently offensive coordinator at North Carolina A&T. UL was more a graveyard for coaches than a cradle. 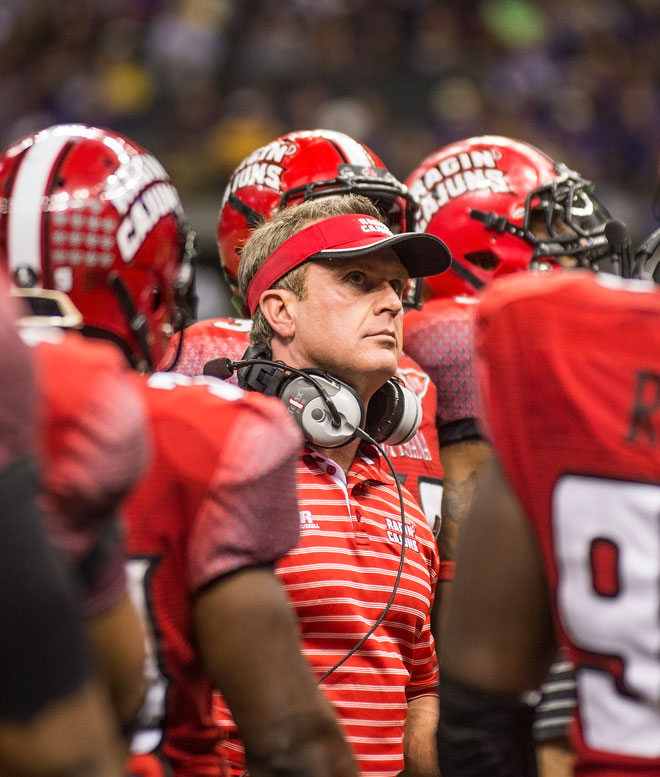 Mark Hudspeth changed all that. And the chance he could leave voluntarily, always a possibility, increases with every win. Add to his unprecedented, sudden success the fact that three Sun Belt coaches left for major conference jobs in the past two years and it's easy to imagine Hudspeth's name on the short list of more than a few athletic directors. But the Sun Belt's higher profile has allowed Hudspeth to coach himself into a corner. A move to Conference USA would be a lateral one at best. The Big 12, the Big 10 and the American Athletic (the conference formerly known as the Big East) are all out of his recruiting comfort zone. It seems for now Hudspeth's career path leads to only the SEC, specifically his home state of Mississippi.

Where would we be without Mississippi? If you're from Louisiana that's an easy one: last. Fortunately for our self-esteem, Mississippi always seems to trail Louisiana on all the bad lists: illiteracy, poverty, obesity. That's not to say our favorite neighbor hasn't done some things well. The Magnolia State managed to inject casinos into its economy without sending a governor to first prison and then a reality TV career. Mississippi claims more authors per capita than any other state, and no state boasts a bigger trifecta than Faulkner, Welty and Williams. And, of course, Mississippi gave us the Blues. So give them the desperate arts: gambling, writing and the Blues. Mississippians earned that; they've paid their dues.

Extend the comparison to more prominent pursuits and Louisiana finishes far ahead. Take football for example. Mississippi doesn't have a professional team. Louisiana high school football ranks among the best, while Mississippi is usually just air space Nick Saban must fly over to get near enough to our recruits to cast his spell. The comparison must begin and end with college football and Ole Miss, Southern Mississippi and Mississippi State.

Ole Miss under Johnny Vaught dominated the SEC in the '50s and '60s up through the exploits of Archie Manning in 1970. But thousands of Confederate battle flags waving to "Dixie" while white supremacists did their worst away from the stadium left a karmic legacy that cast the Rebels into the nether regions of the SEC for 40 years. Southern Miss had its day. That would have been 1990 when Curley Hallman hung on the arm of Brett Favre and parlayed two away wins over Alabama and Auburn (and a one-point win over UL in Lafayette) to an 8-4 record. It certainly wasn't Curley's coaching, as LSU fans discovered when he replaced Mike Archer the next year.

And finally there's Miss State. This fall the SEC lifted the ban on cowbells in Davis Wade Stadium for the first time in 36 years. More good news: Current head coach Dan Mullen after four years entered the season with a 29-22 record making him the first winning Bulldog head coach since Bob Tyler (1973-78). But all might not be well in Starkville; last year's 7-0 start was followed by a 1-5 finish, including a blowout loss to Ole Miss. If Cajun fans want to focus their worries about losing Hudspeth, zoom in on State.

Five SEC head coaches are in their first or second year, among them Hugh Freeze at Ole Miss. Eight others are relatively secure. That leaves Mullen. There's more: Hudspeth is from Louisville, 30 miles south of Starkville. He played at Delta State in Cleveland, Miss., and was head coach just across the state line at North Alabama for seven years where he met his wife. He coached two years at Miss State under Mullen just before beginning his reclamation project at UL. Worried yet? How about this: Mullen earns $2.65 million a year. (The annual value of Hud's package is $806,000, though he can earn another $120k in incentives.)

With all this on my mind I headed to Starkville for the LSU game. It was not until I reached Meridian that I began to realize there was a lot more to Mississippi football than I imagined. Reading the Meridian Star, a good, old-fashioned newspaper, gave me the first inkling that Mississippi was home to a unique, self-contained football universe with legends and rivalries older and more colorful than practically any in Louisiana. The lead column defended East Mississippi Community College from just up the road in Scooba for a 90-7 rout of Coahoma Community College from Clarksdale. Another article reported EMCC averaged 67.4 points per game and gave up only 2.6. EMCC was No. 2 in the national junior college rankings while Jones Junior College (Ellisville) was third and Mississippi Gulf Coast (Perkinston) 10th.

Any fan who's heard of Cam Newton or Zach Mettenberger knows about junior colleges. It's where players go after crimes or grades cost them a shot at a four-year school. But apparently that's changing. In 2013 SEC schools signed 46 junior college players, the previous high was 25 in 2011. And every school signed at least one, even Vanderbilt. The thinking now is that some players need a year or two of extra development to be able to contribute to a BCS program. Thirteen of the 46 signees came from Mississippi, six from EMCC. Not surprisingly, Hudspeth was onto the Mississippi JUCO talent pool from the start, signing, among others, Jemarious Moten, Harry Peoples, Corey Trim and Stephen Brauchle. On the UL 2014 commitment list is Dylan Bossier, a wide receiver from Teurlings now at Jones Junior College.

The next morning I was adding all the questions about Mississippi junior colleges to the ones about Hudspeth and Miss State as I sat on the porch overlooking the water at Lake Lowndes State Park when the park manager's truck pulled up. His name was Randy Rigdon and he had come by to check on our DirecTV reception. He couldn't do much about that, but when I asked him about EMMCC's 90-7 win I found out he was not only the chaplain at EMCC but also part-time linebacker coach. He explained some of Mississippi's junior college rules: 14 teams across the state that only play each other, limited to 55 players each, divided into two divisions with a four-team playoff for the state championship. Then it got interesting. Each school was limited to eight out-of-state players; the rest had to come from designated counties surrounding the school without regard to differences in population or the number of football-playing high schools. Recently, that hard rule had been softened a bit; the designated school only has first refusal on players in its district.

The scheme is a holdover from the original 1928 legislation to provide agricultural training and education opportunities for rural students. Eleven of the 14 schools were established before 1929, and the other three in 1948-49 to accommodate returning veterans.

Those hardened men changed the character of the league from local boys enjoying an extended football career to GI Billers who had experienced war and hurried to make up for lost time. Mississippi junior college football became legendary for its violence. In Mississippi Juco: The Toughest Football League In America by X.M. Frascogna, former Ole Miss head coach Billy Brewer recalled watching an East Mississippi team come on the field for pre-game warm-ups. "Half the team entered the stadium from the north end zone and half from the south. Both groups lined up at the goal lines and started running towards the 50 yard line. They picked up speed and collided at midfield like battering rams or mountain goats. It was like a train wreck. The other team just stood and watched in disbelief."

No doubt the coach who designed that drill was "Bull Cyclone" Sullivan who park manager Rigdon played for in 1966. "I would have played for him in 1967, but he found out I was part of a panty raid. He took me to my second-floor dorm room, tore the sheets off my bed, kicked out the screen window and tossed everything out. He only said, "Catch it before it hits the ground." Rigdon said if the team had a poor practice, they would move to a nearby snake-infested pond and scrimmage in up to 3 feet of water. Sullivan kept his players in leather helmets, each with a hand-painted skull and crossbones and no face mask well into the '60s. The lack of protection was supposed to make his players play smarter. Sports Illustrated immortalized Sullivan with a cover story in 1984, "The Toughest Coach That Ever Was," one of the best stories Frank Deford ever wrote. Find it online.

The next day we headed to Starkville for the game. We never made it, finding Davis Wade Stadium literally along the side of the road.

We drove through campus and parked in one of the open fields the area is known for. Davis Wade is beautiful, though none of the original 1914 structure remains. Certainly the four-story video screen is new. The HD screen proved crucial not only because we sat three rows from the top but also to fully appreciate the pregame show: a replay of the classic Saturday Night Live cowbell sketch with Will Ferrell and Christopher Walken. When Walken said, "I have a fever, and the only prescription is more cowbell" the place sounded like a Guernsey stampede.

The stadium was full, the fans enthusiastic, and opposite the giant screen the construction of 5,000 additional seats and corporate suites was well under way. Before, during, and even after the game there was no sense of a coach in trouble. Over four days everyone I asked seemed to like Mullen. There were reservations about play-calling, the two-quarterback system, and the nagging absence of a signature win. That problem would have been solved without LSU's stunning passing attack.

Mullen seems safe enough to see his young team develop over the next year or two, and since he's the only SEC coach remotely on the hot seat, UL fans can relax a bit. But it wouldn't hurt to make State their second favorite team, minus the cowbells.

On the way home we stopped outside of Jackson. A sales clerk asked me if I was a football fan. She said her boyfriend played in The Band of Gold, the marching band at Mississippi Gulf Coast CC. "Football is huge around here. They go crazy in Perkinston." That goes for Columbus, Starkville and Scooba, too.