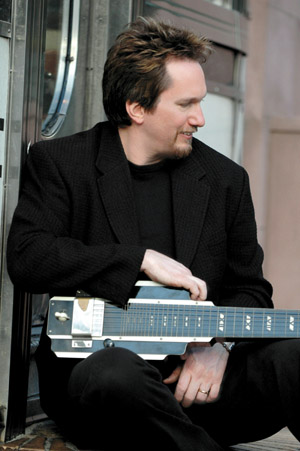 Throughout the 1980s and 1990s, Jerry Douglas' phone rang whenever a Nashville country artist needed a dobro player for an album. Through his work with other fellow instrumental masters such as Bela Fleck, Ricky Skaggs and Tony Rice, Douglas was one of the prime architects of the progressive "newgrass sound," and his reputation made him the most sought-after dobro player in town. His prolific session work was great for his bank account, but that wasn't enough for Douglas. "I was making a fine living playing on people's records, but the music changed, and I didn't really like where mainstream country was going," Douglas once said. "It started to really bother me, so I had to stop."

The result was a creative renaissance that's firmly established Douglas as a bona fide genius on the dobro. He joined Alison Krauss & Union Station for a string of Grammy-winning albums and was tapped by the Coen Brothers for the landmark soundtrack to their film O Brother Where Art Thou? ' including the film's runaway hit "Man of Constant Sorrow." He's earned Musician of the Year honors from the Country Music Association, and The National Endowment for the Arts awarded Douglas a National Heritage Fellowship in 2004.

But Douglas shines brightest in his solo performances and albums. Free from the constraints of session work or sideman duties, Douglas takes the dobro's country roots to new heights, blazing away with a freewheeling mix incorporating jazz, blues, rock and Celtic influences into a singular sound. That sound is on display on his most recent album, The Best Kept Secret, and Douglas brings that artistry to Lafayette next week for a Louisiana Crossroads concert performance to benefit the Dr. Tommy Comeaux Fund. It's the second Lafayette appearance for Douglas, who enthralled local fans at a 2001 performance for the Comeaux Fund. And to sweeten the pot, local slide guitar master Sonny Landreth will once again be sitting in with Douglas, promising a night of fretboard fireworks from two musical visionaries whose talents are hardly a secret anymore.