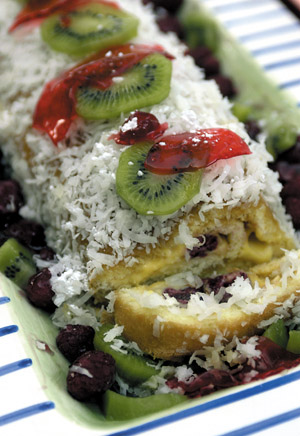 When it comes to bribing Santa, French children have the edge. American kids put out a glass of milk and cookies in hopes of impressing Saint Nick, but there is no cookie on the planet that can match a slice of the traditional French Christmas cake, a Bûche de Noël, or Yule Log.

The history of this famous gateau dates back to ancient druid celebrations of the winter solstice. On the shortest day of the year, a large tree trunk would be set alight to symbolize the rebirth of the sun as the season began its slow return to warmth and light. By the middle ages, the ceremony of burning an elaborately decorated log with ribbons and winter greenery came indoors, and the yuletide log burned all night in the hearth. In the morning, the ashes were collected and distributed to the four corners of the house to protect the inhabitants from sickness and the evil powers of the devil. As huge hearths gave way to smaller cooking stoves, the big log was replaced by a smaller branch, set on the Christmas table surrounded by sweets and treats. French pastry chefs whipped up a new version of the tradition, creating a cake rolled up to resemble the rings of a tree, with icing bark and sugary snow often decorated with meringue mushrooms and raspberry holly berries.

French emigrates to Lafayette have brought their tradition with them; a splendid Bûche de Noël can be purchased at Poupart's French Bakery. But for those who like to do their own baking, Françoise deReynies has developed a simple recipe.

The Alliance Francaise cooking instructor has a small hand mixer she waves around as she cooks. Her measurements are approximations. Moving with slapdash speed, she juggles batter, baking, sipping wine, frosting, laughing and teaching in part French, part English. The kitchen looks like chaos, but the results are astonishing. Light and not too sweet, her cakes have become famous in the Francophone community of Lafayette.