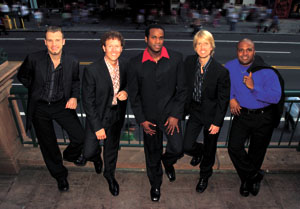 The a capella group Rockapella started out as four guys singing on street corners in New York City, where they caught the attention of Spike Lee. The director booked them on his PBS show, Spike & Co.: Do It A Cappella, which led to a gig as the house band for 1990s geography game show Where In The World Is Carmen Sandiego? "That kind of put Rockapella on the map," says member Kevin Wright in a phone interview. The rest is history for the acclaimed pop a capella band ' with some Folgers and Taco Bell commercials in the mix.

The five-man band has recorded 19 albums, several in the United States and many in Japan, where Rockapella has a huge fanbase. The group's live shows include covers of "Stand By Me," "My Girl" and "Rock the Boat," in addition to other R&B, pop and blue-eyed soul originals, says Wright. Its 2002 album, Smilin', includes versions of George Harrison's "Here Comes The Sun" and The Beach Boys "Surfin' Safari." "Rockapella has always been no instruments," he notes, but says its performances are like watching a band, except without the drum breakdowns or guitar solos. "We're singing pretty much constantly for an hour or two hours," he says.

Wright joined the group about eight years ago. Rockapella is made up of all new members today, as its founders have moved on to other careers. In addition to Wright, who sings lower tenor, the group consists of lead singer Scott Leonard, bass singer George Baldi (who also sang with an early incarnation of Boyz 2 Men), newest member John K. Brown and secret weapon Jeff Thacher, whose voice acts as percussion and drums. "Thacher is the best in the world at what he does," says Wright. "He ends up sounding just like drums."

Tickets for the 7:30 p.m., March 20, Rockapella show at the Heymann Center are available at all Ticketmaster outlets, by phone at 262-8686 or online at www.pasa-online.org. Call 237-2787 for more info. Rockapella will also hold a daytime performance March 21 at 10:30 a.m. for junior high and high school students. Groups must register with PASA, and admission is $5. Registration forms are available on PASA's Web site.