UL's CajunBot has a new competitor: the Ragin' Bot. 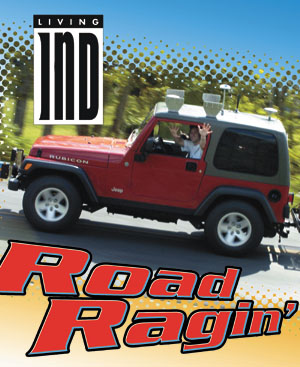 A bright red 2005 Jeep rolled down the west levee road of the Atchafalaya Basin last week ' with a satellite receiver mounted on its roof, a driver with neither hand on the wheel and a computer system powered by a generator. It was the first test run for Ragin' Bot, the UL Center for Advanced Computer Studies' second autonomous mode all-terrain vehicle.

"We're getting ready for the race from Los Angeles to Las Vegas," says Patrick Landry, senior systems administrator for the computer department at UL. "This year, the prize is $2 million."

Last year, Ragin' Bot predecessor CajunBot failed to complete the course, foiled by a protruding STOP button that accidentally switched off the robot. This year, Landry says, "We have the capability to win." Last year's model, in addition to its design flaw, was a little slow. The brand new Jeep, donated by Lafayette Motors, is more stable than the original Cajun Bot, which is re-entering the competition this year. Ragin' Bot is currently topping out at 23 miles per hour ' fast enough to run the 150-mile course in under 10 hours.

The Jeep has a kill and pause switch, and a driver can take manual control if necessary. But the real driver is Ragin' Bot's computers, which receive direction from a GPS mapping system with a series of waypoints. Once any technical glitches in Ragin' Bot are ironed out, the last hurtle for the vehicle will be a visit by the Defense Department, qualifying the robot as a race entrant. The Grand Challenge '05 takes place Oct. 8.