Honey and a local fruit delicacy make for a sweet pie at T-Sue's Bakery. 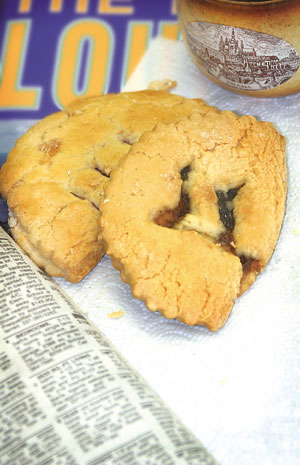 T-Sue's sweet dough fig pie combines two quintessential Cajun flavors ' backyard figs and local honey ' into one homemade confection that has travelers pulling off the interstate in Henderson to pick up a baker's dozen. Owner Phillip "T-Sue" Roberts makes the flaky pastries in his bakery from scratch, every day. Pies, doughnuts, brownies, cookies and his French bread are sold in the bakery shop, where locals sit at the counter drinking coffee, reading the paper and discussing politics or whether the sac-a-lait are biting in Henderson Lake.

"The sweet dough pie recipe comes from my grandfather, Pierre Pete Patin," Roberts says. Patin's bakery opened in 1934 specializing in French bread and beignets. When Roberts was 9, his mother died, and his grandfather took him under his wing, teaching the boy how to cook and bake. Roberts opened T-Sue's in 1978.

Roberts used to buy fillings for his pies from a New Orleans bakery supplier, but when a national chain bought out the distributor, he took matters into his own hands. "We pick our own figs and cook them into preserves the old-fashioned way," he says. "And we make enough to last us until the next season. [Fresh fig season is in July.] Then we get our honey from Bernard's right down the road." Bernard's honey is gathered from hives along the Henderson Levee, where the bees hone in on wildflowers and willow catkins from the Atchafalaya Basin.

The honey is incorporated into the sweet dough that encases the fig filling, a special recipe developed by Patin. "My grandfather taught me a lot," says Roberts.