"What we want to be is a fact-finder, not a prosecutor." 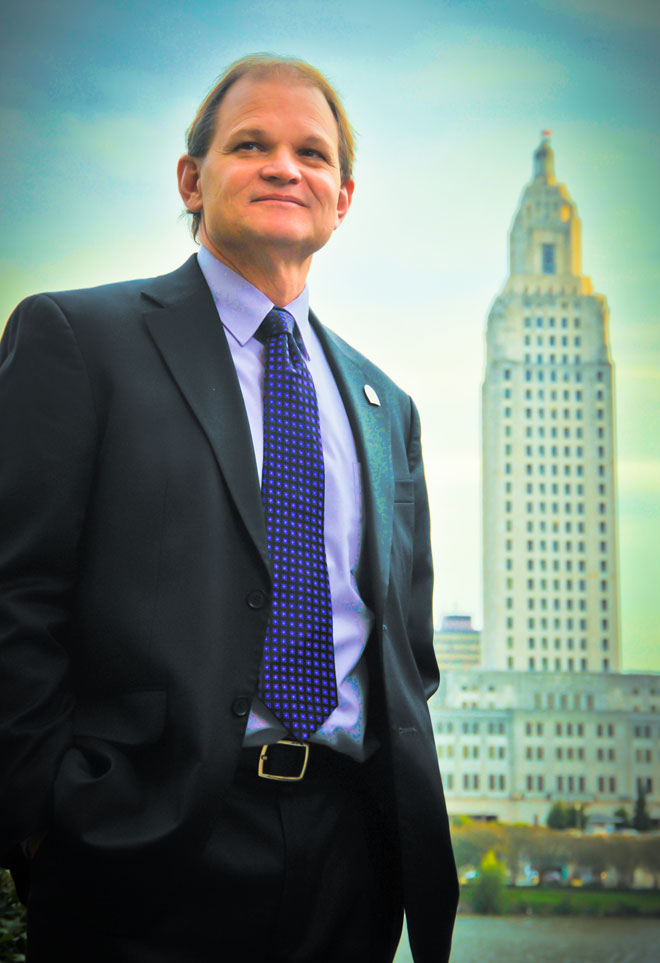 When he was nominated for the position of legislative auditor in 2010, Daryl Purpera told then Times-Picayune reporter, now Senior Audit Analyst Ed Anderson in his office, "What we want to be is a fact-finder, not a prosecutor."

Nonetheless, that's the charge that has been leveled against him at times in regard to Gov. Bobby Jindal's administration. Some of his audits have either directly or indirectly criticized the governor's priorities, but Purpera says that's the nature of auditing.

"I could see how people would think that," he says, "but that isn't what we're intending to do."

His next opportunity could be with Jindal's public-private hospital partnerships. They were met with criticism in the Legislature, although lawmakers were virtually powerless to slow the deals down.

"Those will have to be audited," Purpera notes, qualifying that the private side of the partnerships will likely only be reviewed in conjunction with an overall audit all of the providers that contract with the Department of Health and Hospitals. "We can go look at if they performed the services and if they charged the right fee, but we don't really have an interest in their financial statements."

Purpera also played a role in the trial regarding Jindal's cash-balance retirement plan last spring. When the Supreme Court overturned the plan, Associate Justice Greg Guidry parroted in his ruling what Purpera had been saying all along. Guidry stipulated that the constitution requires the Legislature to use the findings of the legislative auditor's actuary, not the private firm hired by the administration.

"The constitution is bigger than the administration, me and the Legislature," Purpera says.

Purpera says the structure of his office makes his job highly independent. He answers only to the Legislative Audit Advisory Council, made up of a handful of lawmakers. Once the council moves forward with a recommendation, the Legislature ratifies the hire and it takes a two-thirds vote of both chambers to terminate whomever holds the position. The council does not tell him what to audit, but it can suggest projects.

"I don't have enforcement powers, but by using public reports, by making good recommendations, I can have influence," adds Purpera, who makes $170,000 annually but isn't required to file financial disclosure reports with the state Ethics Administration.

Yet even with a budget of $32.5 million for the current fiscal year and a staff of 293, the office can't look into every tip, he said, which means strategic decisions have to be made. 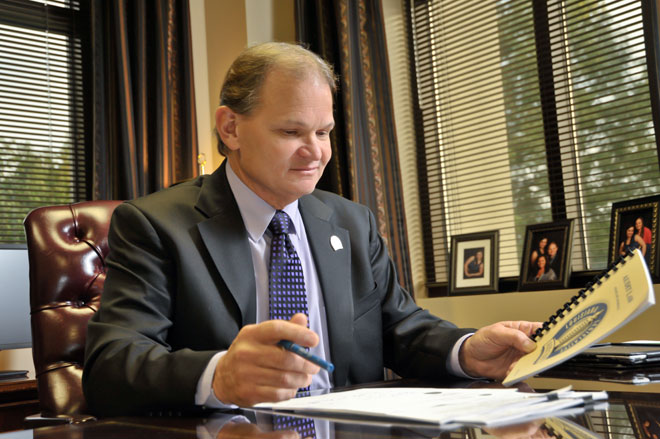 "We get allegations every day from all kinds of different sources," Purpera explains, "and I don't have enough people to cover every one of them, so we look at where the risk is."

Still, you can tell he has 95 CPAs on staff, especially when you review their recent work history. The office helped take down former Jonesboro Mayor Leslie Thompson, who was found guilty of malfeasance in office for questionable monetary practices. The defense attorney went as far as to tell the court that Purpera was the one who should be looked into, for spending $500,000 on the case. The office's audits have also changed the way DHH monitors restaurant safety and brought serious heat down on parish assessors for the way they value properties.

Even though his profile is growing, Purpera says running for public office doesn't interest him.

"This office makes a difference," Purpera says. "I look at public service as being just that, serving the public."

Auditor-in-Chief
The thoroughness and independence of Daryl Purpera's office has him winning respect in many Acadiana corners. By Leslie Turk

Daryl Purpera, who was appointed legislative auditor after 25 years with the Louisiana office - most of which were spent in the investigative section - is making a name for himself in these parts.

"Leg. Auditor Slams Opelousas' Housing Authority" was the headline on an April 2011 story published by this media group.
Then the new executive director of the housing authority in Opelousas, Joe Ann Tyler said it could take years to clean up the mess auditors found former ED Walter Guillory and his board left behind.

Like Purpera's team had done for the Lafayette Housing Authority in a report the previous January, it reviewed a number of transactions and activities in Opelousas under Guillory's stewardship as part of an investigative audit. And it wasn't pretty.

The legislative auditors called into question the legality of Guillory serving as ED of both agencies, bringing down about $242,000 in salary and benefits. In Opelousas he used a housing rental unit as his office, auditors found, making it unavailable for rental.

The list of troubling findings and potential illegal activity uncovered by the auditors was lengthy, assisting federal investigators who had been looking into both agencies after independent audits by private CPA firms turned up problems. Those federal probes resulted in one former OHA employee pleading guilty in September to conspiracy to commit wire fraud. There are more prosecutions to come in this case.

"We have a very good working relationship with the federal investigators," Purpera, 52, tells ABiz. "Both of us aren't going to try to step on top of each other."

While the investigative audits get most of the headlines, the office's work is much broader. All local governmental entities must be independently audited, and Purpera's office has to approve the contract with the CPA firm (a list of approved auditors is published on his website). If there is a potential fraud finding, the legislative auditor will step in to investigate if more probing is necessary. Once the report is complete, the findings are forwarded to the local district attorney and attorney general for potential prosecution.

Purpera's staff also does a significant amount of advisory work. At times, even that can uncover very troubling issues.
"Legislative Auditor lambasts LPTFA" was our headline in June of this year after Purpera took a look at the troubled public trust's internal controls, or lack thereof. 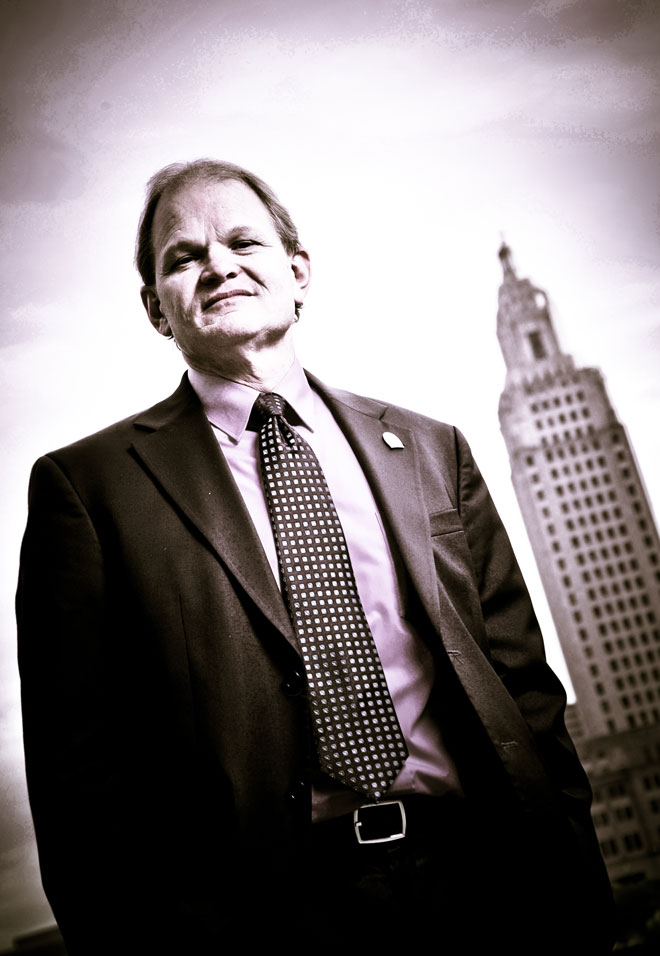 Purpera's office concluded that the Lafayette Public Trust Financing Authority, which controls tens of millions of dollars intended to benefit the city of Lafayette, needs substantive improvements in its system of accounting and management controls, noting deficiencies in accounting controls over numerous years - it found that weaknesses had been reported in audits as recent as last year. The auditors said management "had failed to take all steps necessary to ensure that an effective system of internal control was in place. ... This condition resulted in the auditors proposing numerous and material audit adjusting journal entries."

Auditors discovered that LPTFA does not even prepare or adopt an annual budget, despite that it is required to do so by state law, and it doesn't have an ethics policy for board members.

The auditor also found a number of potential conflicts of interest involving the board's attorney, Richard Becker, who has been providing legal services for the past 14 years at fees ranging from $85 to $250 per hour, plus expenses, without a formal or written contract and without ever having been approved by the board.

Auditors also noted that LPTFA has not always complied with the state's Open Meetings Law, did not hold annual meetings and did not keep the spirit of the Open Meetings Law by holding regularly scheduled meetings. It also was not clearly stating the business to be discussed at its meetings.
While the findings may have been unsettling to many, they didn't meet the criteria for an investigative audit because there was no finding of fraud. "It didn't warrant a full investigation by this office at that time," Purpera says.

The legislative auditor issues 4,000 reports a year, and once a report is complete, it is released to the agency being audited on a Wednesday (and the DA and AG if necessary) and to any legislators who request it; it is then posted on the legislative auditor's website the following Monday. All audits of local governmental agencies and nonprofits that get public funds, whether performed by Purpera or an independent CPA firm, are posted on the site.

The legislative auditor is truly independent of any political pressure, Purpera maintains. "The state did a fabulous job of setting up its auditor [to act independently]," he says. "First, I am legislative branch; I'm not executive branch ... [and] I don't feel compelled to please members of the Legislature."

Purpera, who is appointed by the Legislature, says no one has ever accused him of playing politics, nor does he ever feel pressured to look into an entity for political reasons. "I think the controls in this office would stop that from happening," he says. "We're all professional CPAs, and we'd like to keep our licenses."