Fasting on Holy Friday pays a small penance in Catahoula. 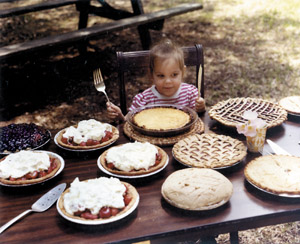 Good Friday is a day of fasting and penance. It's the day Jesus died on the cross, the darkest day on the Catholic calendar, followed by Easter Sunday, the brightest morning. Many Catholics in Louisiana pray the Way of the Cross, walking the 14 stations depicting events in the Passion of Christ and attend liturgical services with readings from the Gospel of John.

Cajuns, however, don't like to go hungry. Catholic canon holds that one meal on Good Friday is acceptable. The folks of Catahoula, a small fishing community on the rim of the Atchafalaya Basin, have followed a tradition handed down from medieval France that combines the breaking of the fast with a party. In Catahoula, Good Friday is synonymous with Pie Day.

"It started out in France as Jour de Tarte," Mary Guirard says. "Probably mid-12th century," adds her ex-husband Greg Guirard. Greg continues to live on the family land in Catahoula, and Mary lives in St. Martinville. The ritual of Pie Day, however, brings them back together every year.

Greg's mother, Leona "Tootie" Martin Guirard, a Catahoula schoolteacher, picked up on the local tradition after the family moved there in 1939. "Good Friday being such a holy day, they didn't cook on that day," Mary says. "On Thursday it was tradition to make a sweet dough pie with custard filling, or if Easter was late enough, blackberry. And they would make a tomato pie with a crust for something salty."

Morning was for fasting and praying. Then the residents would go from house to house to visit their relatives and eat pie. One meal. Only pie.

"My mama really loved pies," Greg says. "She got everybody to come here and bring a homemade pie."

On Good Friday morning, Tootie woke her children early. "We had to suffer," Greg says. "No coffee, no milk, no water."

Tootie Guirard is also responsible for the outdoor Stations of the Cross that hang in ancient live oak trees along the road from St. Martinville to Catahoula. Early on, there was no church in Catahoula, and residents had to travel to St. Martin de Tours in St. Martinville. Tootie had her cousin, artist Clelie Hutchins, paint wooden depictions of the Passion, which were nailed up in trees making the trip back a holy pilgrimage.

"When Tootie started having pie day, she included the Way of the Cross. The last station is in front of St. Rita's church in Catahoula," Mary says. "They would end up at the church. The priest would go to Tootie's; she'd have him bless the pies, and then he would stay for Pie Day. Father Dion came to Pie Day, and then Father Frank. Then Father Colombun condemned Pie Day. He said it was sacrilege to eat pies on Good Friday. He even put it in his sermon."

The tradition, once celebrated all over the village, has begun to die out in Catahoula.

"Pie Day isn't so popular any more," Greg concludes. "What happens here, people who see everybody only on pie day gather. And the pies have gotten a lot more fancy."

"We wind up with so many pies, the rule is when you leave, you leave with a pie," Greg notes. "Some people get away with store bought pies. They'll probably go straight to hell."

Catahoula Sweet Dough Pie
(from Who's Your Mama, Are You Catholic, and Can You Make a Roux? by Marcelle Bienvenu)

Sweet Dough (makes four 9-inch pies)
3/4 cup shortening
1 cup sugar
1/2 cup milk
2 eggs
1 teaspoon vanilla
4 cups all-purpose flour
4 teaspoons baking powder
Cream shortening and sugar. In a small bowl mix together milk, eggs, and vanilla. Add to the shortening and sugar, blend together. Combine flour and baking powder. In a large mixing bowl, alternate blending the liquid mixture with the dry ingredients. The dough should come away from the sides of the bowl. Divide dough into four equal parts and roll out on a floured board. Place dough in four 9-inch pans, crimp edges, add filling. Bake at 350 degrees for 30 minutes or until golden brown. Or roll the dough into smaller circles, add filling, fold over and bake.

Blackberry Filling
Wash berries and drain well. For every quart of berries use one and a half to two cups sugar and one quarter cup water. Mix sugar and water in a large pot and bring to a boil, add berries and allow to cook until the mixture is thick. Stir to prevent sticking.

Custard Filling
1 12-ounce can of evaporated milk
12 ounces of water in which 1/2 cup of cornstarch has been dissolved
1 cup sugar (or more if you like sweet filling)
2 eggs
1 teaspoon vanilla
Combine all ingredients in a saucepan. Slowly bring to a gentle boil and stir until custard thickens. Cool and spoon onto sweet dough crusts. To make coconut filling, add one cup of shredded coconut to the custard when it is cooling.

On a floured surface roll out dough into a disk. Line a buttered pie pan with the dough. Fill, and bake at 400 degrees for about 30 minutes, until dough is golden. This is a great dough for cutting into small disks and folding over filling to create individual half-moon shaped pies.