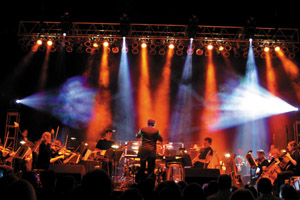 If Jimmy Page and Yo-Yo Ma got together to jam, it might sound a lot like the The Music of Led Zeppelin. Creator and conductor Brent Havens first concocted the idea in 1995 for the Virginia Symphony, and the show has since been presented in Atlanta, Denver, Jacksonville, Buffalo, Hartford, Albany, Sioux City, and other U.S. cities. In Louisiana, the only other performance of the show was in New Orleans.

"Led Zeppelin had some unusual harmonic structures," Havens says, "and they're lick-based. In the orchestra, playing those licks just adds an extra dimension to the lines of 'Black Dog' or 'Whole Lotta Love.' And I wasn't really interested in doing my own interpretation of it because I thought that the people who really know this music and love this music, they really do love and know this music. So if you go and change it, it's almost like you're offending them. It's like taking Bach or Beethoven and saying, 'You know what? I'm going to do my own interpretation of it.' I didn't think the audience would be interested in the Muzak of Led Zeppelin. They want to hear the real deal."

The orchestra accompanies a rock trio of drums, electric guitar and bass guitar. On lead vocals, the upper hemisphere of Robert Plant's voice is replicated by Randy Jackson, lead singer of Zebra, the band that was spawned in New Orleans in 1975 and scored a national hit with "Tell Me What You Want" in 1983. Ironically, Zebra started off playing covers of Led Zeppelin songs, as well as the music of Rush and The Moody Blues.

"Zeppelin fans aren't going to be that thrown off," Jackson says. "Zeppelin used a lot of orchestra in their music to begun with, like with 'Kashmir' and 'The Rain Song.' Led Zeppelin III was full of orchestration. The songs that didn't have orchestration, like 'Black Dog' and 'Heartbreaker,' the orchestra's playing the riffs, so it's just making the whole thing a lot thicker."

The concert runs for more than two hours and features 17 perennial Zeppelin favorites like "Immigrant Song," "Heartbreaker," "Black Dog," "The Ocean," "Kashmir" and ' of course ' "Stairway to Heaven."

"This is a rock 'n' roll concert," Havens says. "Be prepared for a wall of sound."

"It's a lot of fun," Jackson adds, "and if you're a Zeppelin fan, you won't be disappointed."

The Acadiana Symphony Orchestra performs The Music of Led Zeppelin with guest conductor Brent Havens and Zebra vocalist Randy Jackson, Saturday, July 21, at 8 p.m. at the Heymann Performing Arts Center. Tickets range from $38 to $75 and can be ordered through ASO's Web site, www.acadianasymphony.org, or by calling 232-4277. For more information about The Music of Led Zeppelin, visit www.themusicofledzeppelin.com.