Lafayette Parish School Board member Greg Awbrey's plan to do away with the free legal counsel offered by the 15th Judicial District Attorney's Office boils down to a disagreement over the board's politically-motivated desire to hire an outside law firm to investigate the superintendent.

Since the September retirement of James Simon, the board's former appointed legal counsel from the District Attorney's Office, the board has been confronted with a relatively new concept: a legal counselor who actually does his job, meaning his advice doesn't always jibe with the board's wishes.

During Simon's stint as the board's appointed counsel, the legal advice provided to the board rarely, if ever, went against the board's wishes, especially in relation to its fight against Superintendent Dr. Pat Cooper.

Enter Roger Hamilton, the ADA selected to take Simon's place as the board's appointed counsel. Hamilton came on the scene in the midst of the board's attempt this summer to hire an outside law firm to conduct an "investigation" of Cooper. That push for an investigation was wrought with questions, largely over whether it was valid in the first place as such requests by public bodies require approval from the Louisiana's attorney general. As stipulated by state law, several requirements must be met before a public body can legitimately request the AG's approval for hiring outside counsel, such as a specific set of reasons for the investigation and the dollar amount that will be spent in the process. Simon even broke with tradition on the matter and advised the board in July to flesh out the resolution and get it in line with the requirements of state law.  The board, however, didn't listen, and the resolution sent to the AG's office met none of state law's requirements, despite repeated calls from the public to justify spending the money on an investigation deemed by many in the community as a "witch hunt." The result: an opinion from Hamilton, one he submitted to the AG's office stating the board's request was bunk; i.e., no investigation was warranted since the board failed to follow any of the guidelines established by state law. 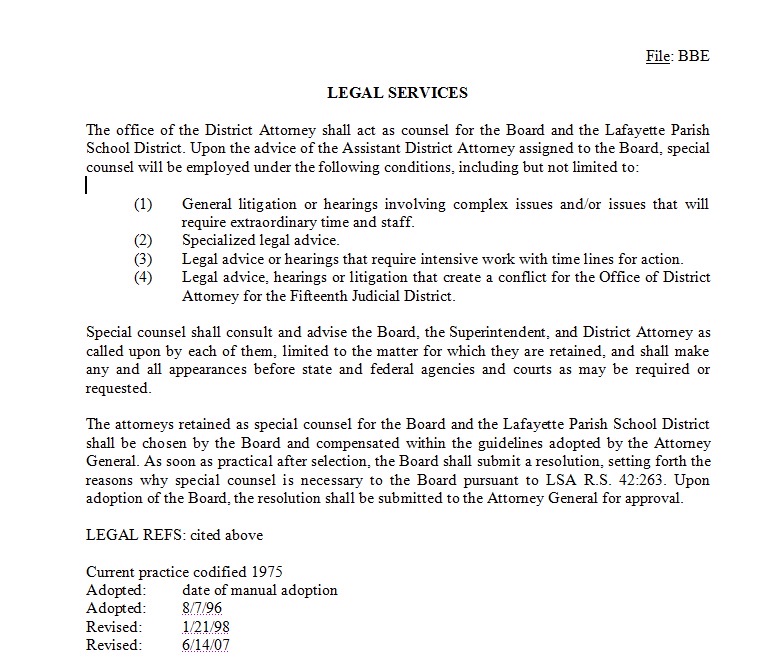 That, coupled with District Attorney Mike Harson's admonishing of the board for violations of the state's Open Meetings Law during a special meeting in late-October, are arguably the impetus behind Awbrey's attempt to cut ties with the DA's office (let us reiterate that the service is provided free of charge).

Awbrey, who has been one the biggest opponents to Cooper's superintendency, has introduced a package of items for Wednesday's meeting related to the termination of the school system's relationship with the DA's office.

Included among those items is a resolution to eliminate the board's policy making the DA its official legal counsel, as well as an item calling for the creation of a committee charged with finding a replacement. Another of Awbrey's resolutions calls for hiring the Baton Rouge law firm of Hammons & Sills as the board's interim legal counsel, which will be anything but free.

For a board already facing a budget crunch, not to mention an electorate suspicious of passing any additional tax measures to alleviate the school system's funding woes, Awbrey's plan is fiscally unsound. Likewise, Awbrey gives no explicit reason to justify a termination of the board's relationship with the DA's office, except that he didn't like Hamilton's opinion and the fact that Hamilton forwarded it to the AG before Awbrey could object.

Awbrey liked Simon's one-sided approach to the job (even though it conflicted with state law), and when he didn't hear what he wanted to hear from Hamilton and Harson, he set out on a mission to find a legal counselor whose advice may be more in line with his positions - no matter the cost.