Since he was knee-high, Jim Romero has been rolling his own dough for his specialty pies. 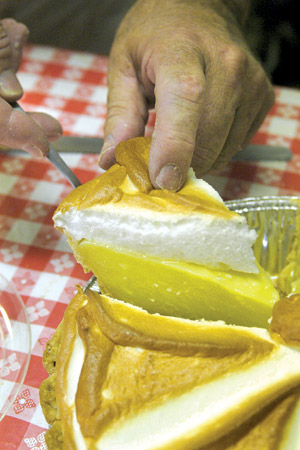 Jim Romero's mama was the cake specialist in the family. His grandfather baked biscuits in a black skillet in the fireplace. His grandmother taught him to stir a roux on the

wood burning stove in her kitchen. But from an early age, a younger Romero found his calling in the family kitchen. "I'm the pie guy," he says.

Now 60 years old, Romero has been turning out pies in his small shop in Coteau for more than 21 years. The business began, as many small enterprises did in 1986, because of the oil bust. Romero, out of a job, devised a way he could work with his wife and children the way he had with his family when he was a child, rolling out old-fashioned crusts piled high with from-scratch fillings. While the technique may be based on the memory of his 4-year-old hands patting out sweet dough, the recipes he developed are all his own.

"My grandmother used to make a 10-inch pie," Romero says. "That's a great big pie, not the little 9-inch ones you get in the store." He developed dough amounts that would roll out round enough to line the huge pans he uses, as well as a proportionate amount of filling for his extra deep dish pies. Three days a week he makes, by hand, 15 kinds of pie ' cherry, blackberry, blueberry, Very Berry (blackberry, blueberry and strawberry), apple, peach, pineapple, pumpkin, sweet potato, pecan and cream pies with meringue topping lemon, chocolate, coconut, banana, bouille (the Cajun term for vanilla custard) and a speciality item, cheesecake. And he's recently begun making sweet dough tarts, a pastry treat that's a Cajun speciality.

Sweet dough differs from a regular pie crust; it has more liquid, sugar, eggs and a pinch of baking powder to make it rise. "It's more like a Danish dough," Romero explains. "It's not like pie crust at all. I started making them because I wanted to offer a little taste of something sweet. A lot of little children come every week, and they bring a $1. I like them to be able to buy themselves a treat. They know what they want, a little vanilla tart, la tarte a bouille, mama would call it."

Jim's Kountry Pies is located at 3606 Romero Road in Coteau. Romero also sells his pies and sweet dough tarts at the Oil Center Farmers Market on Saturday mornings and will bring pies into town for pick-up at the market. Call 365-7465 for more info.