They fell to Destrehan, but the Wreckin' Rams did Acadiana proud with their third straight trip to the state finals. 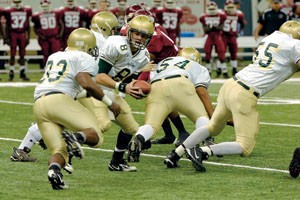 Back-to-back state championships are always difficult to pull off, but Acadiana High's Wreckin' Rams bringing home another state title would have required a major upset last Saturday. In the end, the Rams had more than they could handle in No. 1 seed Destrehan, who came into the game with a perfect 15-0 record. The 14th seeded Rams, 11-4, were playing in their third consecutive 5A state championship game.

In their first 5A title win, the Destrehan Wildcats defeated Acadiana 41-21 in the Louisiana Superdome, with quarterback Jordan Jefferson, who has committed to LSU, throwing two touchdown passes and running for another. Destrehan receiver Demaris Johnson had 44 yards on four receptions and five carries for 94 yards, including two touchdowns. Combined, the duo had 436 yards and five touchdowns; Johnson was named MVP, and Rams quarterback Jonathan Morvant was voted Outstanding Player for the runner-up team.

The game had its share of exciting ' and inspiring ' moments. Morvant was sidelined with a shoulder injury for about the last eight minutes of the first half (sacked on a busted play in which he stopped to look at an official while Destrehan's defense did not) but didn't let the injury keep him from leading his team in a state championship. He returned in the second half and orchestrated a 61-yard scoring drive on 11 plays, slicing Destrehan's lead to 28-21 with 6:58 left in the third quarter.

Destrehan was quickly forced to punt on its next possession, but when the punt bounced backwards and hit an Acadiana player, it was recovered by the Wildcats. The rest of the night belonged to the bigger and faster boys from Destrehan, though the Rams deserve serious respect for their performance ' and for their program's three-peat appearance in the Superdome.