Atchafalaya reunites to help raise funds for the Tommy Comeaux Fund, now just $30,000 away from its $1 million goal. 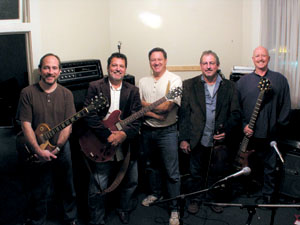 During the 1980s, you could hear Atchafalaya all across the Gulf Coast ' from Mother's Mantle in Lafayette to Schooners in Panama City Beach, Fla. Now after a hiatus of nearly two decades, Atchafalaya returns for a performance at Medicine Show 11.

"The timing's just right," says band member Chris Foreman. "Everybody in the band just kind of wants to do this one and see how it goes."

Atchafalaya's musical waters run wide ' from Cajun and rock to Dan Fogelberg and D.L. Menard. "Part of why we never got a record deal was because you couldn't categorize our music," Foreman says with a laugh. Despite releasing four albums on their own, including Live at the Boudin Festival, a major record deal eluded the band. In 1986, Larry Menard, who started the group as a duo with Foreman at the Red Dog Saloon in 1978, left the group. And by 1991, despite a Nashville recording session with famed Kenny Rogers' Gambler producer Larry Butler, the band had called it quits.

Recently, members of the campaign committee for the Dr. Tommy Comeaux Memorial Endowed Fund for Traditional Music approached Atchafalaya about a possible reunion performance for this year's Medicine Show. Says Foreman, "Through the years there have been some really cool bands that have been part of this, and for us to be a part of it is an honor." Foreman and Menard will be joined by Atchafalaya alums Cal Arnold, Charlie Rees and David Varisco.

Dr. Tommy Comeaux was a Grammy-nominated musician and local pathologist, best known for his work with BeauSoleil. On Nov. 8, 1997, the 45-year-old Comeaux was struck by a car while cycling and died. In the wake of his death, friends gathered soon after to mourn their loss and celebrate his life with the first Medicine Show held at Grant Street Dancehall. Every year since then, the annual show has served as a reminder of Comeaux's spirit and as a fund-raiser to help establish an endowed chair in traditional music at UL Lafayette. Now a decade after Comeaux's death and the first Medicine Show, the fund is only $30,000 short of reaching its $1 million goal.

Medicine Show 11 takes place at Grant Street Dancehall on Saturday, Dec. 22, with music (in order) from The Figs, Atchafalaya, The Traiteurs, and Sonny Landreth. Doors open at 7 p.m., and the music starts at 8 p.m. Advance tickets are $15 and are available from the Acadiana Center for the Arts. To charge by phone, for more information, or to make a tax-deductible contribution to the Dr. Tommy Comeaux Memorial Endowed Fund for Traditional Music, call (337) 233-7060. The show will also simulcast on KRVS 88.7 FM and at www.krvs.org. To hear Atchafalaya, visit www.myspace.com/atchafalaya.