Thirty-five-year-old Salvador Perez of Lafayette was facing a charge of criminal damage to historic buildings after being arrested on the 12th anniversary of the 9/11 attacks. 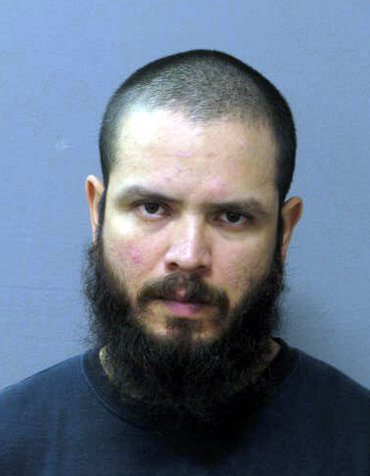 A Lafayette Parish grand jury Thursday returned a no true bill clearing the man responsible for the creative political vandalism affixed to the 9/11 memorial downtown. Thirty-five-year-old Salvador Perez of Lafayette was facing a charge of criminal damage to historic buildings after being arrested on Sept. 11 - the day of the act and also the 12th anniversary of the 9/11 attacks.

Perez affixed cartoonish cardboard airplanes to the Twin Towers beams at the memorial, along with a cardboard effigy of former President George W. Bush standing nearby holding a remote control. Other iconography on the artwork indicated that Perez's "vandalism" - we use quote marks because the items affixed to the memorial caused no damage and were removed early that same morning - was an expression of the so-called truther movement, that is, the belief that the federal government orchestrated the 9/11 attacks for political gain. 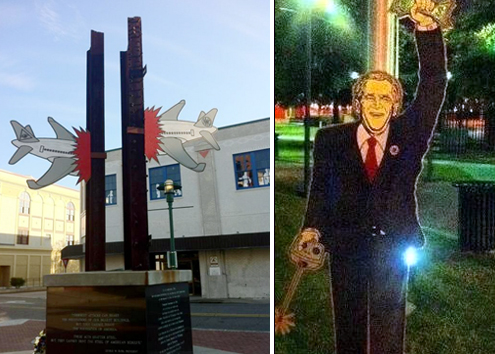 The case garnered international media attention, and while Perez's public art display outraged many in Acadiana, a good number of First Amendment supporters rallied to his defense, creating a Facebook page that helped raised funds to hire a lawyer to defend Perez.

That attorney, Kirk Piccione, suggests that Perez's arrest was as politically motivated as the artwork he left at the memorial.

"Ace, as everybody calls him, is relieved," Piccione tells The Ind. "This is not the first time that he has engaged in public art expressing political views, and he has been very apprehensive while these charges have been pending about doing that any further, which is exactly the problem with the police making an arrest in a case like this - it has a chilling effect on people's political expression, and that's why this kind of thing can't be allowed to happen. But he is very relieved and grateful that the grand jury did the right thing."

Recently, we celebrated Veterans Day, during which we memorialized the sacrifice of veterans and military service members, past and present. Those veterans and service members sacrificed in order to protect America and to protect and preserve the individual rights of every American. Some of those inalienable rights are enshrined in our constitution, and include the right to freedom of religion, the right to bear arms, and, as relevant to this case, the right to free expression. It would deprecate the seriousness of the sacrifice made by those veterans if we as Americans did not stand up and fight for the right of every American to express his political views, even when we disagree with the content of those political views.

The content of the speech in this case suggested that the 9/11 tragedy was politically motivated and suggested an alternative theory for its cause. Our laws hold that political speech in particular is entitled to the highest degree of protection.  And yet, in this case, we believe that the underlying motivation for the arrest was based of the content of Mr. Perez's expression.

In the past, people have placed flowers, wreaths, and other objects on the 9/11 Memorial, some of which were captured in pictures in the media the day after Mr. Perez's arrest. And during festivals in Parc Sans Souci, people have been seen sitting on the Memorial and children climbing on it. Yet none of those people have been arrested for trespassing or defacing public property. Only Mr. Perez was arrested. And the only thing that distinguished Mr. Perez from these others is the content of his speech.

We cannot let this happen in our country. Even though the Grand Jury did the right thing, it is still unfortunate that the police made an arrest based on disagreement with the content of Mr. Perez's expression. This type of activity by the police can have a chilling affect on political expression by others, even if prosecution does not result. We must all be vigilant to preserve and maintain the freedoms guaranteed to us by the sacrifice of the veterans and military service members. And we must denounce activities which suppress freedom of expression, regardless of weather we agree or disagree with the message.