Pastry chef Sue Barras shares some of her favorite recipes for the holidays. 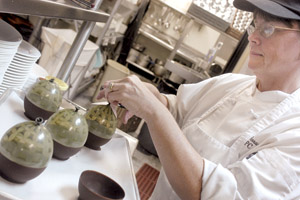 Her favorite toys are unsalted butter, good chocolate and heavy cream. Everything she makes is from scratch and everything she makes ' depending on her whim ' rotates on several menus in town. If you've got an envie for White Chocolate Bread Pudding, look no further than Charley G's. Got a taste for Chocolate Cake with Chocolate Truffles? Find someone with a membership to Le Triomphe. Her signature at Masala is an Indian-inspired White Chocolate Cup with Mango Mousse. And at the new Picante on Ambassador Caffery, a Mexican classic, Tres Leches, is the star of the dessert menu.

Barras spends her time between the four kitchens, whipping up standards and dreaming up new combinations, building a reputation for such exquisite desserts that even the most jaded diner saves a little space for her sweet treats. She's always been interested in food (her grandmothers taught her to bake), but her career plans definitely didn't include butterfat and hot fudge. An Ohio native, Barras was pursuing a degree as a dietitian at Ohio University and moonlighting as a dishwasher when she fell off the wagon.

"I was washing dishes at the Yacht Club, then they moved me up to salads, then I was cooking on the line and somewhere along the way, I fell in love with pastry," she says. She studied under a French and a Canadian pastry chef, one who revealed the secrets of chocolate and another who taught her the light-handed work of pastry dough and sugary confections.

Nineteen years ago, she arrived in Lafayette and got a job invigorating the food service at Lafayette General Medical Center. Oil was king in Lafayette, and the hospitals were fêting their doctors; LGMC tried to lure them in its doors by hiring Barras to make pastries exclusively for the medical staff. Business was good at the hospital, and Barras started selling cakes to the public. "That was back in the day of [Lafayette General CEO] J.J. Burdin," Barras says. "When I worked there, we actually made good food come out of the hospital kitchen. His philosophy was good food would make people feel better and get healthy faster." A dozen years later, the hospital downsized, and pastries disappeared from the food service.

Barras began freelancing for the dessert carts at local restaurants, concocting specialties to suit the character of the different menus. Monday, Wednesday and Friday she can be found in Charley G's kitchen. "Charley G's has a local flair. They always have to have bread pudding, crème brûlée, pecan pie and the Sugarbuster chocolate mousse." Don't let that mousse fool you; while the only sugar comes from the high quality semi-sweet chocolate, it's enriched with whipped, heavy cream. "It may be low sugar," she says, "but it's not fat free." The rest of the dessert cart is up to the imagination of Barras, and that's the same sort of arrangement she has with Le Triomphe, Picante and Masala. "This week, I made a chocolate raspberry mousse, coconut cake, a flourless chocolate cake topped with tiramisu mousse, and a pineapple cake, along with the house specialties."

And what does Barras serve at her house for the holidays? Pumpkin cheesecake. "People might not think they like pumpkin," she says, "but one taste, and I've got them hooked."

Blend together and press into the bottom of a greased spring form pan. Set aside.
Cheesecake batter

Pour into spring form pan, bake in a water bath at 300 degrees for 1 hour or until a knife comes out clean when tested in the center of the cake. Chill before cutting. (Barras wraps her spring form pans with aluminum foil to keep the water out of her cake pans in case they leak.)

TRES LECHES CAKE
Cake batter
3/4 cup butter, softened
1 1/2 cups white sugar
9 egg yolks
1 teaspoon vanilla extract
2 cups all-purpose flour
1 1/2 teaspoons baking powder
1 cup milk
9 egg whites
1 teaspoon cream of tartar
Preheat oven to 350 degrees. Grease and flour a 9x13-inch pan. In a large bowl, cream together the butter and sugar until light and fluffy. Add the egg yolks one at a time, beating well with each addition, then stir in the vanilla. Sift together the flour and baking powder. Add the flour mixture alternately with the milk; beat well after each addition. In a large glass or metal mixing bowl, beat egg whites and cream of tartar until whites form stiff peaks. Gently fold the egg whites into the cake batter using a rubber spatula. Spread the mixture evenly into the prepared pan. Bake in the preheated oven for 25 to 30 minutes, or until a toothpick inserted into the cake comes out clean. Allow to cool.

Small balloons
Blow up 10 balloons to the size of the cup you want. Then dip them into melted molding chocolate and place them onto a cookie pan lined with wax paper, put them into the refrigerator for about 30 minutes then re-dip and chill for 2 hours. At this time you can pop the balloon and remove it, and you have a cup. If you want it to look like a coffee cup, make a handle out of the same chocolate by piping it into a "S" shape, chill, then attach it with some melted chocolate. Keep in a cool area until you are ready to fill.

¼ to ½ cup Kahlua liquor depending on how strong you want the coffee flavor to be
Cream together. Set aside.
3 cups heavy whipping cream
2/3 cup sugar
Whip together. Fold all but ½ cup of the whipped cream into the cream cheese mixture and pipe into your coffee cups. Garnish with remaining ½ cup of whipped cream.