Thanks to the Sugar Bowl, BeauSoleil's David Doucet and Hawaiian guitarist George Kuo join together for a one-night only performance in Lafayette. 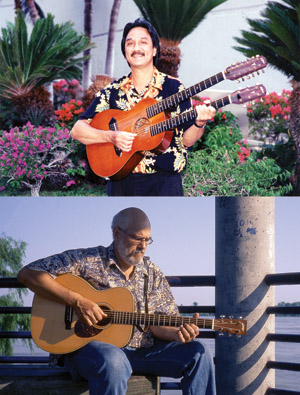 While frontman and fiddler Michael Doucet receives the lion's share of the spotlight and attention in BeauSoleil, his brother and guitarist David Doucet is an unsung virtuoso in the venerable Cajun band's progressive sound. Both in his rhythm parts and solos, David's nimble fingerpicking encompasses not only his mastery of Cajun music, but his encyclopedic knowledge of Celtic, Caribbean and New Orleans rhythms. And when he isn't holding down the six-string slot in BeauSoleil, David's brilliance shines in side projects like his 1957: Solo Cajun Guitar album and Peace Stories, his 2001 holiday collaboration with Crescent City songbird Theresa Andersson and Dr. John sideman John Fohl.

He's had a fascination and love for Hawaiian music since the mid-80s, honing in on the similarities between and differences in Hawaiian slack-key open tunings that also surface in folk and blues songs. "In June 2003 I was invited to perform solo in Hawaii," writes Doucet via e-mail. "Part of the contract was with University of Hawaii to do some workshops. Having never really done this before, I had no idea of what to teach, but I decided on 'J'Ai Passé Devant Ta Porte' in a slack-key tuning. That was a hit. At the UH show in Honolulu, which was sold out, I had the guts to play a Hawaiian tune which got a standing ovation."

The trip led to an enduring friendship with Hawaiian guitarist George Kuo ' and a unique opportunity courtesy of the University of Hawaii football team's perfect 12-0 season.

"I knew that the Rainbow Warriors would be coming to the Sugar Bowl, a first in UH history," Doucet writes. "It was a fantasy to get some Hawaiian musicians over here to Louisiana. Despite the expense, George figured it was a once in a lifetime [chance] to follow the team to New Orleans and the Sugar Bowl."

During his trip, Kuo will team with Doucet for one New Orleans show and a Lafayette performance this Thursday, Jan. 3. "I expect to learn a lot in the two shows we'll be doing," writes Doucet. "Since I learn by ear and by rote, it should be quite interesting."

BeauSoleil's David Doucet and Hawaiian guitarist George Kuo perform at 7 p.m. Thursday, Jan. 3, in The Art House, upstairs at the Acadiana Center for the Arts. Hula dancer Leialoha will join the group for a pair of set-closing performances. Tickets are $10; for more info and/or to charge tickets online or by phone, call 233-7060 or visit www.LouisianaCrossroads.org.