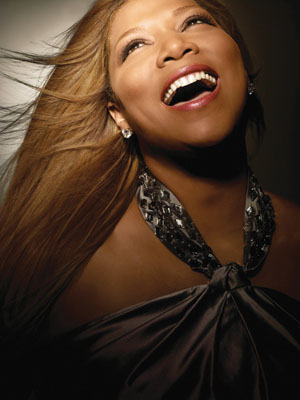 She first made her mark as the "Queen of Hip-Hop," becoming the first female rapper to notch a gold record with Black Reign, while opening the door for a generation of women rappers to follow. These days, Queen Latifah is making a whole different kind of musical noise, having now released two albums in succession ' The Dana Owens Album and Trav'lin' Light ' in which she sings standards from jazz, soul, blues and the American songbook.

Suddenly the Queen of Hip-Hop sees a musical future for herself that few would have envisioned when she arrived on the scene with her 1989 debut CD, All Hail The Queen. "I've always envisioned that I could sing songs like this for the rest of my life," Latifah says. "It would be mighty cool to be like Tony Bennett."

Considering the success Latifah has enjoyed with acting, as a talk show host (The Queen Latifah Show) ' not to mention as co-owner of a film production company and as co-manager of her own career ' it's hard to envision her devoting all her efforts toward a single pursuit. But Latifah certainly sounds like she is enjoying this new phase in the music side of career, noting she had wanted to do CDs like The Dana Owens Album and the newly released Trav'lin' Light for many years.

"I looked at this as part of me growing up, that I could sort of release this side of myself," says Latifah in a mid-September conference call. "I just always feel like the more I go on through my career, that I'll be able to explore different sides of my talents and abilities and be able to share that with the world. That's always my hope. Sometimes things work and sometimes they don't. But I'm always on the optimistic side."

When it comes to her career, there actually haven't been many setbacks for the woman who was born in New Jersey in 1970 as Dana Owens. She began rapping when she was in high school, and in college got involved with Afrika Bambaataa's "Native Tongues" collective, which favored a more positive, Afro-centric brand of hip-hop.

A demo she recorded during this period landed Latifah a contract with Tommy Boy Records. She made an immediate impact with All Hail The Queen, which yielded a hit single, "Ladies First." But it wasn't until her third CD, Black Reign, that Latifah truly broke through. A single from that 1993 album, "U.N.I.T.Y.," went top 10 on the R&B chart, and it won her a Grammy for best solo rap performance.

In those early years, Latifah, focused on immediate goals, but she already knew this was just the first stage for her career. "First of all, I had to become a rapper," Latifah says. "I had to establish myself as a female. I had to establish myself as a business person running (my) own management company ' and even push forward rap music in general, because back then people were still calling it a trend that's going to die out. It won't last. People probably behaved that same way toward rock and roll. But rock and roll lasted and so did hip-hop. We always knew it would, but we had to sort of prove that to the masses that just did not want to accept that we were here. So that's a lot of what we contended with back then. But I always saw the future, I felt like it could go on and on and expand."

Even as Black Reign was going gold and establishing Latifah as a bona fide female rap star, she began pursuing acting with roles in the movies Jungle Fever, House Party 2 and Juice and an appearance on the TV series The Fresh Prince of Bel Air among her earliest credits.

A big break came in 1993, when she landed a co-starring role in the Fox television series Living Single. From this point on, Latifah became known as much for her acting as for music. Living Single enjoyed a four-year run before being canceled in 1997, and Latifah returned to music with her 1998 CD Order in the Court. This time, she shifted her sound more toward R&B, and made her singing a focus on the album (with duets with Faith Evans and Pras from the Fugees among the featured moments on the CD).

But acting was still very much a priority. In 1998, she had roles in the movies Sphere and Living Out Loud. (In the latter movie, she sang several jazz standards, a hint of the direction her music would take six years later with The Dana Owens Album.) As Latifah's star continued to rise during the 1990s, she became a role model for women, unabashedly embracing her success a plus-size beauty who could exude confidence at every turn.

"I was raised to believe that beauty comes from the inside out," Latifah says. "It was hard to get that lesson initially, and I think part of the reason was because my mother and father were so handsome a couple. My mother was really beautiful to me, and my father was very handsome. They got a lot of attention from people.

"But I think my mother really tried to instill a lot of self-confidence in me, and so did my dad, by including me in everything that my brother got to do and just respecting me as a female," she says. "I think that that's important for the girls that are growing up now, and even women. We deal with a lot of self-esteem issues, and I find we make a lot of bad decisions when our self-esteem is not high. So I'm always one for pushing self-love, self-esteem, and I feel like there's nothing more attractive than a confident woman. I don't care what she looks like. To me it's about no matter what package you come in, really just having that confidence and getting that across."

Latifah's career as an actress is hitting new peaks. She's been in several highly successful films in recent years, including The Bone Collector, Bringing Down The House, Chicago (for which she received an Oscar nomination for best supporting actress) and this summer's Hairspray.

For now, she's devoting her time to a headlining tour that focuses on material from The Dana Owens Album and Trav'lin Light. She sees the two CDs as being very closely related.

"I think the main things that separate this album and the last album is I really wanted to do some big band on the last album, and I really didn't get to, some big band swing kind of stuff," Latifa says. "So I did get to do two (songs) on this album in that vein." And she's feeling more confident than ever about performing songs from these CDs live.

"I did like 25 dates (in 2005) with Erykah Badu and Jill Scott on the Sugarwater Festival, and I did a bunch of dates last summer," she says. "So I think I just started to feel more comfortable singing live, entire shows, whereas I had never really done that before."