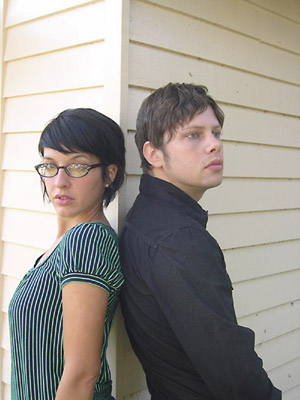 As Dax Riggs ponders the amount of time he spends on the road, fresh off a flight from a festival in Columbus, Ohio, he recalls a recent stay in Austin, Texas. A switch from the norm of living on the highway and in hotels, Riggs and his band deadboy & The Elephantmen stayed with friends. At one point he remembers thinking, "This would be nice to live somewhere, wouldn't it?"

Touring in support of its debut CD for Fat Possum Records, the band spends up to four weeks at a time on the road away from Houma, where Riggs has lived since he was 12. Since releasing We Are Night Sky earlier this year, they've chased fame across the country, landing in noted music festivals ' South by Southwest in March, Bonnaroo in June and Lollapalooza in August. Crisscrossing the country in a van and hopping planes to play shows for receptive radio stations is a long way from the days of Riggs' solo shows at local venues such as Renaissance and Sidebar.

"This whole summer's been like a big trying-to-get-our-name-out-there, trying-to-get-our-record-out-there [time], but that's gonna cool off," says Riggs via phone from Houma. "I always enjoyed doing those [intimate solo shows] and I will do those again in the future. That's totally a part of what I do. It makes me happy, and it's fun."

He hasn't played Lafayette ' a bit of a second hometown ' in close to a year, one of his longest absences from the Hub City. After his influential Louisiana metal band Acid Bath dissolved following the death of bassist Audie Pitre, Riggs tinkered in other outfits, including Agents of Oblivion, before forming The Elephantmen. Much of the band's early days were spent gigging in Lafayette. In 2002, the four-piece combo of Riggs, guitarist Jason Dupre, drummer Jeff Lecompte and bassist Chris "Goat" Gautreaux released If This is Hell, Then I'm Lucky, an atmospheric, gothic record. As the band's line-up and style changed, the only constant was its name and Riggs, and he experimented by playing shows that were half solo performances and half full-band gigs. Save for his unique voice and haunting compositions, fans of his early Elephantmen work will hardly recognize the new material. The Elephantmen is now a duo of Riggs and Tessie Brunet on drums and backing vocals, a configuration that's sparked White Stripes comparisons. They're occasionally joined in the studio by accompanying players and on the road by Alex Bergeron, a bassist from Riggs' Agents of Oblivion days.

"Honestly I had these songs that I really liked when I played them almost by myself, and then when I would get too many people playing on them they would turn into plastic rock-sounding [songs] â?¦ weird, just weird things would happen to them," says Riggs. "Once I discovered what works better for my songs, it was a natural progression of understanding how I think my songs should be presented ' just wanting it to be more of stanky rock and roll versus, you know, the more progressive metal-ish kinda edge that we slightly had in a gothic kinda way. I just wanted more soul."

We Are Night Sky has pushed them to the point where one radio hit could spell the end of Riggs' days as a cult favorite and break him into the spotlight as a household name. The 12 tracks' mix of scaled-down rock (with the exception of distorted rocker "Misadventures of Dope") and haunted soulful blues and Southern goth earned high marks in Rolling Stone and Maxim. Former Black Flag frontman Henry Rollins is a big fan of the band, booking Riggs and crew on his television show and repeatedly playing their songs on his radio show. We are Night Sky is at times bare-bones backbeat-only renditions of familiar Riggs songs, other times poetic hymns plucked from a gospel choir book ("Walking Stick"). Much praise has been rightfully given to Riggs' prose and voice, but Brunet deserves her share. Her drumming lays a solid foundation that never crowds the songs, and her light and angelic backing whispers casts light on his dark tones.

According to Riggs, the band's evolution isn't over, and he's eager to return to the studio to cut a new album. After the Elephantmen play Austin City Limits Music Festival (right before Gnarls Barkley, a slot he calls bizarre) and spend a few more weeks on the road this month, Riggs expects to record new songs he's written. He calls the material heavy-sounding soul music with an "electro-Clash feel" and "almost danceable, kind of evil."

"That's the whole idea, for me, behind deadboy & The Elephantmen ' my compositions with different little groups of people to help me be inspired," says Riggs. "It gets kinda stale if it's the exact set up over and over. Deadboy & The Elephantmen will always be an experimental thing and it will always change, and hopefully as things get better, I'd like to have some other instruments added."