In the shadow of Hurricane Katrina, Louisiana native Lucinda Williams returns for a rescheduled Monday performance at Grant Street ' and a chance to remember that home is where the heart is. 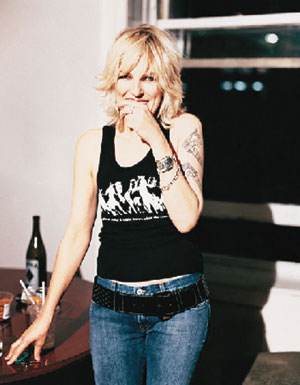 I'm going back to the Crescent City /
Where everything's still the same /
This town has said what it has to say /
Now I'm after that back highway /
And the longest bridge I've ever crossed over Pontchartrain.
' "Crescent City," from Lucinda Williams, 1988

Lucinda Williams seems to have spent her entire musical career either running away from, and maybe more importantly toward, some place that ' at least in her evocative songwriting ' resonates in her head and heart. For a city to be mentioned in a Lucinda Williams song is to have arrived as a place of meaning, a kind of a musical AAA calling card. The cities of the South read like checkpoints on Williams' emotional and musical journey that add up to a map of her very raw, human heart.

Nowhere does Williams' landscape of love and loss resonate more than her native Louisiana, which makes her return this week that much more special. The 52-year-old Williams, on tour with Lafayette native and old friend C.C. Adcock, has rescheduled her Monday, Sept. 26, date at House of Blues in New Orleans for Grant Street DanceHall. And, in keeping with what has become an everyday occurrence of giving in Lafayette, the concert by the three-time Grammy winner has been converted into a relief effort; half the proceeds will be donated to Project HEAL (Helping Employ Artists Locally).

"When we first started talking about doing shows together on tour," Adcock notes, "she thought it was ironic how she'd never played Lafayette. Because before when we were looking at the tour dates, I told her, 'We've gotta get you to do a show there [in Lafayette] some time, maybe re-route you through.' And then all of a sudden here we are couple weeks later, and I suggested why not put it on at Grant Street instead of cancel? And Grant Street and the Acadiana Arts Council made it really easy to transfer the date over. And now we get a little treat."

It's a poignant moment for Williams, out on tour in support of her two-disc live CD, Live @ the Fillmore (Lost Highway Records), to retrace her Louisiana roots. They began in Lake Charles, and Williams hop-scotched around the state as she followed her father, college professor and celebrated poet Miller Williams. One of the stops includes New Orleans, where she spent some of her teen years in high school in the late 1960s until she reportedly was kicked out for refusing to recite the Pledge of Allegiance. (Her father provided her with plenty of reading material to fill the educational void.)

Williams spent subsequent years busking in the streets of New Orleans, a folkie who added her own original material and spin to the covers she sang. She left for another music hotbed, Austin, Texas, in 1974, but New Orleans clearly left her mark as she proved with "Crescent City" from her eponymous 1988 release on the normally punk-friendly Rough Trade Records. The album produced hits for other artists; Mary Chapin Carpenter would later score with "Passionate Kisses" and Patty Loveless with "The Night's Too Long," and Tom Petty covered "Changed the Locks" on his music score for the 1996 film, She's the One.

But "Crescent City" is a declaration of independence for Louisiana natives: "I can hardly wait until / I can hear my zydeco and laissez les bons temps rouler / And take rides in open cars / My brother knows where the best bars are / Let's see how these blues'll do in the town where the good times stay." In the Koch CD reissue's liner notes, Williams recalls, "I went through a lot of changes growing up in Baton Rouge and New Orleans with my brother, Robert, and my sister, Karyn, between 1965 and 1970. My music started there."

Since the hurricane hit, Adcock says, Williams has featured her Louisiana-inspired songs in her encore, and so Lafayette residents and their displaced guests can be assured of the familiar strains of some combination of "Lafayette," "Crescent City," "Lake Charles" (from 1998's Grammy-winning Car Wheels on a Gravel Road), "Louisiana Man" (from 1980's Happy Woman Blues) and "Bus to Baton Rouge" (from 2001's Essence).

And in those songs, as in so many by Lucinda Williams, we'll hear of a yearning for a particular state that, no matter where we are, makes us all feel right at home ' and makes us all want to get back there.

"She's really got a gift for that and seems to consistently do that without cliché, especially with the color of this region," says Adcock, who met Williams in the 1980s when both were navigating their way through the Los Angeles music scene. "There's that sense of sadness and sensuality, like in the two Mardi Gras masks, the frowning and smiling, the major and the minor; those juxtapositions are definitely what home is about to me," says Adcock.

"And it's definitely pertinent to what's going on right now."