Has Louisiana found a way to hold the Corps of Engineers responsible for coastal erosion?

Has Louisiana found a way to hold the Corps of Engineers responsible for coastal erosion? By Bob Marshall, The Lens

[UPDATE: The Times-Picayune reported Dec. 3 that the state Coastal Protection and Restoration Authority voted to authorize the filing of two lawsuits that would ask a federal judge to instruct the Army Corps of Engineers to pay the full cost of a $3 billion restoration program aimed at repairing damage caused by the Mississippi-River Gulf Outlet and to pay the full cost of operation and maintenance of hurricane levees along the Algiers Canal on the West Bank. Read the story here.]

Has Louisiana found the silver bullet long sought by environmental attorneys: a way to pierce the shield of immunity the U.S. Army Corps of Engineers has enjoyed against lawsuits for wetlands damage it may have caused?

That possibility rippled through legal circles in late November after Garret Graves, head of the state's Coastal Protection and Restoration Authority, hinted he could announce a suit against the corps at the authority's Dec. 3 meeting.

The immediate response from environmental lawyers was skepticism - but with reservations.

"I think it is unlikely there is some kind of magic bullet to pierce the corps' immunity," says Rob Verchick, environmental law professor at Loyola University. "But people are always searching for new ways to look at this, so " he trailed off. 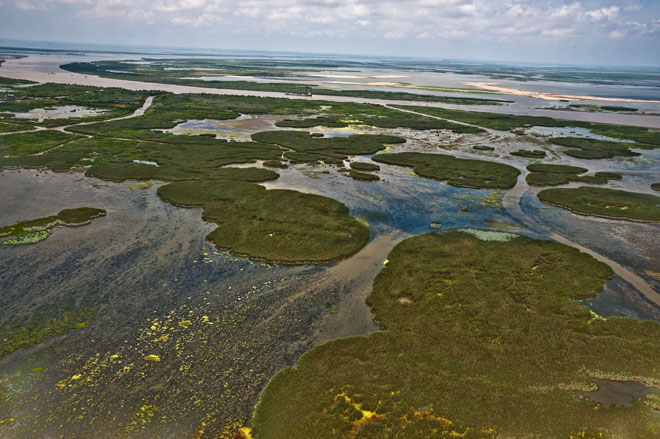 After the Southeast Louisiana Flood Protection Authority-East filed suit against oil and gas companies for wetlands damage earlier this year, Graves began arguing that the suit targeted the wrong villain.

Graves' contention was that the corps-built levees on the Mississippi River - not oil industry canals and saltwater intrusion - have starved the delta of sediment for decades, ensuring steady subsidence.

Asked about the corps' well-established legal immunity for such projects, Graves cracks a wide smile, saying he doesn't want to disclose legal strategy. He later suggests that reporters attend the Dec. 3 meeting to learn more.

The corps' legal protection against plaintiffs claiming harm from its projects rests on two federal laws.

The Flood Control Act of 1928 charged the corps with building levees and other structures to prevent a repeat of the Great Flood of 1927. But Congress, recognizing the government's legal exposure if projects failed or were overmatched by nature, included a clause giving the corps immunity "for any damage from or by floods or flood waters at any place."

The Federal Tort Claims Act, passed in 1946, went even further, extending the corps' immunity beyond natural events to include the actions of its personnel. What legal scholars call the "discretionary function exception" grants a waiver of responsibility to federal agencies for their decisions, even when they know those decisions create risks for parties or individuals. In other words, the corps is protected so long as it makes an informed choice in favor of the option it considers the best.

Those immunities generated national headlines in the wake of Hurricane Katrina. Even though the corps admitted that its mistakes had caused much of the flooding, death and horrific damage, lawsuits by local property owners were bounced from federal court due to the federal statutes.

The Flood Control Act protected the corps from damages caused when its floodwalls along the outfall canals collapsed due to poor construction. The reason: those floodwalls were part of a flood-control project.

That law could not protect the corps from liability for the levee collapses along the Mississippi River Gulf Outlet because it was built for navigation, not flood control. But on review of the lower court decision unfavorable to the corps, the federal Fifth Circuit Court of Appeals ruled the agency was protected under the Federal Tort Claims Act. That's because it deemed the corps to have made good-faith choices among available options.

With all that legal precedent, Graves' intimation that the state had come up with a legal strategy to hold the corps culpable for coastal wetlands loss had environmental attorneys either raising their eyebrows - or rolling their eyes.

Trying to sue the corps for building the river levees would be a tough row to hoe, said Tulane environmental law professor Oliver Houck, because the state "practically bludgeoned the corps" into building that flood protection project.

Some speculate that the state might be going after the corps for dams on Mississippi River tributaries, such as those on the Missouri River, for blocking sediment needed to rebuild the sinking deltas around New Orleans. But that would be a stretch because the levees were already in place when most of those dams were built.

Verchick wonders if the state might try to use the Federal Tort Claims Act to crack the corps' invincibility. The discretionary function exclusion provides immunity only if the corps can show that it knew the damage those levees would cause.

In other words, the corps must have proof that it was aware that building the levees would cause subsidence but chose levees anyway, on the grounds that protecting people and property was more important than a collapsing coast.

"So, IF the state could show that the Corps did NOT understand the risks its levee construction and maintenance imposed on the public," Verchick wrote in an email, "then it could theoretically beat back immunity under the FTCA [Federal Tort Claims Act] by showing there was no policy decision being made. But I think that is highly unlikely. And there would still be immunity under the FCA [Flood Control Act]."

All of which means that environmental attorneys, whatever their suppositions, will be paying close attention as the coastal authority meets Dec. 3.