Fiddler and frontman Michael Doucet reflects on three decades of BeauSoleil as the band prepares for its 30th anniversary shows. 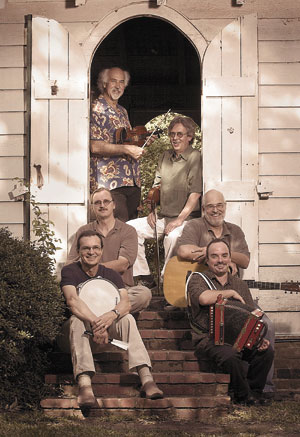 It's often said that being in a band is like being in a marriage, and few bands stay together for 30 years. What's the secret to BeauSoleil's longevity?

Good friendship, good leadership from everyone, good camaraderie, good musicianship, good talent and good luck. There really is no secret other than being who you are, not trying to be something you are not, not trying to fit in, not trying to please everyone all the time and not trying to have a goal that you think will make you happy or fit your projection in the mirror. Kind of like a "rolling with the punches" scenario. The initial ideal or spirit of BeauSoleil was to convey the unspoken essence of our Acadian French ancestry through our own take on the music that was passed down to us. The initial acquaintances and visits of so many unheralded but enormously accomplished masters has been the defining moment of our core. From Dennis McGee to Bébé Carrière to Varise Conner to Nathan Abshire to Doug Kershaw to Marc Savoy to Jo-El Sonnier, just to name a few amongst the many that have befriended us and graciously allowed our music to flow together, is our shared secret.

Was there a particular moment or time period when you and the band could feel yourselves breaking through to a wider national audience? What did that feel like?

From the very beginning, I knew how special Cajun French music was because I've experienced this cultural phenomenon within my family as a youngster and discovered that because it is so deeply felt, it's a very subtle expression that's difficult to put into words. But I did have a feeling that the world of the late 1960s was starving for hero figures that lived their lives as true as a fairy tale but must be real. The simplicity of the music and the lives of the musicians who carry that tradition have to be true to themselves. That is what knocked me over; the functional simplicity of living in a complicated society. So I guess with all the energy of [guys] in their twenties we sought to accomplish this with great fervor. BeauSoleil began at Hector Duhon's camp with Bessyl Duhon, Kenneth Richard and myself getting away and honing our songs and ideas into our first gig (for free) at the Bon Temps Rouler club in Holly Beach playing acoustic Cajun music to a crowd of hardened Cadjins who looked like they had just been visited by Martians. We liked their reaction. From there in 1976 we performed in France, recorded our first record in Paris, played the National Folk Festival in Washington, D.C., and were asked to perform at Jimmy Carter's inauguration the following January. So I guess you could say that we started off "breaking through to a wider national audience."

But some of the hardest audiences were here in Louisiana ' those that were stuck in their prejudices and single-minded understanding of our culture ' and that's where we decided to dedicate our energies to. Through the efforts of the National Council for the Traditional Arts, the Southern Folk Foundation, and the NEA, Dewey Balfa and I were asked to coordinate public school programs by bringing Cajun and Creole musicians into the schools and explaining the history of our people, our music and our diverse culture and what it meant to be of that ancestry.

Out of that, BeauSoleil became an educational vehicle of our own history that told the story of our musical heritage from as many sides as we could portray and still remain true to our roots. We played various festivals and tours in the states, France, European nations and Canada and, of course, right here in Louisiana.

After recording with Swallow Records, in 1980 Chris Strachwitz of Arhoolie Records came to visit me and asked my advice about recording older, unknown musicians which led to the recordings of Octa Clark and Hector Duhon, Canray Fontenot and others. That eventually led to Chris asking me, "Would you and the BeauSoleil boys like to record for me?" Well ' and this is a true story ' I called Errol, David, Billy and Tommy and asked them if they'd like to record in about an hour and meet me at the chapel in back of the Diocese office where I worked my day job. From that session recorded with two microphones we went on to Marc Savoy's store where we recorded other numbers with Dewey and Dennis McGee.  That album, Michael Doucet dit BeauSoleil, seemed to hit a national nerve and got rather surprising national reviews. So I guess it was at that moment, perhaps, that I decided to bring this music to every state in the union on our own terms as Cajun musicians living in Louisiana. This was an unprecedented move, as no other group had tried to usurp these American language and cultural boundaries by performing a North American music sung in French around the country to people who didn't know that Cajuns or Acadiens existed. We've played every state in the union more than once.

We owe a great debt to Garrison Keillor and his Prairie Home Companion radio show for asking us on the show after hearing the Arhoolie record and opening the ears, minds and hearts of mid America to our music.

In 1986, there were five nominees for the Traditional Folk category in the Grammys, and we were one of them with Zydeco Gris Gris on Swallow Records. Of course, Rockin' Sidney won the prize with "My Toot Toot," which was an extremely catchy and popular tune sung in English with his piano accordion and a zydeco beat track. OK, I said to myself, now is the time to make the move and try this music thing as full-time employment; and we did. At first, I felt like there was a whole lot of explaining about our origins and history that had to get across to the audiences that weren't there just to get drunk and party, but sometimes the music just had to stand for itself without explanation, and that's where the strength of it all came into play.

The band's collaborated and played with a number of artists over the years (Mary Chapin Carpenter, the Grateful Dead, etc.). Any favorite moments or stories regarding those collaborations?

Too many stories there. The Chapin thing in a nutshell: Mary comes to see us at a dance at a VFW hall sponsored by the dance group "Twist and Shout" that was put together after our 1982 performance at the Smithsonian Folklife festival in Washington, D.C. We talk a bit. She gets signed with CBS and writes this song with us in mind about Louisiana and asks us to record with her. Because of both of our performing schedules it doesn't happen, but the request comes in a year later, and we record it and have a great time playing â?¦ Then comes the Country Music Awards and playing at the Grammy Show in NYC then playing all around the country and even stopping in for a show at the Super Bowl.

The Dead had asked us to play for Mardi Gras 1989, and I canceled because my wife, Sharon, was due with our child, Ezra, during that time. Well, the [rest of the band] thought I was nuts, but I said, "Well, if they really want us, they'll ask us again." And sure enough the next year they did, and it was quite an experience playing the Oakland Coliseum and then jamming with them.

Getting a call from Keith Richards asking me to play on his solo record [Talk is Cheap]. Then after jamming with him, he says to me, "If I'd play fiddle I'd play just like you!" That sort of blows your mind.

Having Bonnie Raitt come up on stage and kiss me then ask if she could jam a while. Playing after the tractor pulls at the South Dakota State fair and announcing we're going to play our national anthem, and all the farmers stand up and put their John Deere caps to their chests as we play "Jolie Blonde."

You're going to be playing songs from every BeauSoleil album for the 30th anniversary shows. If you've been listening back to the albums to prepare for the shows, have there been any surprises for you? Any particular songs or albums that you see in a different light than when you recorded them? And what are your personal favorites of the albums and/or songs you've cut?

It really surprises me how much stuff we did! In 1986 we recorded Allons à Lafayette on Arhoolie, Bayou Boogie on Rounder, the [Grammy-nominated] sound track for Belizaire the Cajun and Christmas Bayou on Swallow.

Each album has a flow. As we were initially a fiddle/string group, our accordion players (Bessyl Duhon, Errol Verret, Pat Breaux, Jimmy Breaux) had to adapt to playing reels, contra dances in minor keys that weren't in the typical dancehall accordion repertoire.

Some of the songs were learned directly from the source, like McGee and Fontenot who are no longer living. That kind of puts things into perspective.

I like songs that play on words and have a unique melody and chord progression. I really am happy to have recorded Dance de la vie, L'amour ou la Folie and Cajunization for the Rhino label. Gitane Cajun captures a lot of what we aspire to do. But inevitably at a live gig, someone will yell out a request from an older recording that we haven't played in years and almost forgot and enjoy playing it so much that it then becomes a part of our repertoire again.

If BeauSoleil had a mission statement, what would it be?

It is what it is and can really only be that. If you're into a nostalgic trip or Cajun punk or "big butt" songs or whatever, that's fine. Cajun music is the pulse of Cajun people to the point of, 'Where do they want their minds and hearts at the moment?' A Cajun doesn't want to be corralled into anything, although we're still seemingly suffering from this persecution complex that happened 250 years ago. We've overcome two major hurricanes this year, and we all know we haven't seen the last of them. So, I think it's time to break through and just be ourselves without any agenda of manipulating people to like it or dislike it but just to live it ' which was the initial essence of it all in the first place. You play Cajun music because it moves you. That's why our grandparents were so content. If you scheme, you'll get caught up in it and have to live it.

Today's music scene is so broad. There's so much available at our fingertips, and anyone with a hard drive can record songs, so it's hard to say what the current strength or vitality of the Cajun music scene is. I know it's going to continue and be an influence, as well as being influenced by the passage of time and trends. I look forward to the changes.