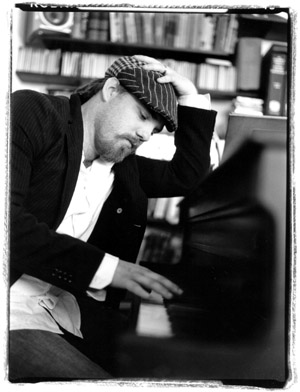 Marc Broussard looks like a boxer in training. He's compact, talks with a scratchy swagger and is rarely seen without his trademark derby evoking images of Burgess Meredith in Rocky. And he has a mini-entourage, as evidenced by the personal assistant and trainer that accompanied him to a recent interview at Jefferson Street's Filling Station restaurant.

It's a world he's embraced since the spring of 2004, when the Carencro native found himself in the company of heavyweights. Broussard landed a major-label record deal with Island Records (complete with a big-budget video), heavy-duty promotional appearances on shows like Jimmy Kimmel Live and a tour schedule that included opening slots for megastars like Dave Matthews Band.

But like countless other stars-in-the-making, Broussard quickly discovered that a major-label deal is often a curse more than a blessing. He wanted to release the uptempo rocker "Home" as the first single from his debut Island album Carencro, but label executives opted for the more pop-oriented "Where You Are." The label CEO and president left shortly thereafter, and the incoming CEO fired a number of key Broussard supporters, including the talent rep that signed Broussard to his Island deal. His entry into the big leagues was just getting started, but he was already hearing sour notes.

"The new CEO of the company [L.A. Reid] gave me an open invitation to his office and then just wouldn't take my calls or meetings," says Broussard. "That was an indication that things were about to move south."

Still, Broussard went to work on his followup album. He recruited some special guests like New Orleans' Trombone Shorty and incorporated New Orleans rhythms and hip-hop grooves into a mix of all-original material. Broussard finished the album in May 2006 and sent it to the label ' where it was greeted by the sound of crickets chirping. "It took two and a half months for the CEO to even listen to the record," he says. "And then, even though they'd approved every song before they started recording, they didn't like the album. It was a soul record, and they said it was too urban; they were looking for something that was more pop-rock."

The writing was on the wall. "I learned some great lessons from it and walked away [from Island] with my ass still intact," says Broussard.

Island retained ownership of Broussard's unreleased second album, and in the music-business equivalent of a non-compete clause, Broussard cannot re-record any of those songs for a period of time. Faced with that challenge and the desire to not let any more time slip away without a new album in stores, Broussard pondered his next step.

The result is the covers album SOS: Save Our Soul (Vanguard Records), which Broussard debuts with a CD-release party this Saturday at Grant Street Dancehall. Featuring iconic songs by soul legends Al Green ("Love and Happiness"), Otis Redding ("I've Been Loving You Too Long") and Marvin Gaye ("Inner City Blues"), it also includes one original Broussard song and lesser-known gems like Rance Allen's "Let the Music Get Down to Your Soul" and Bobby Womack's "Harry Hippie."

At first glance, it's impossible not to wonder: what artist in his right mind tries to invite comparisons to Otis Redding and Marvin Gaye? "The approach for us was not to improve on the songs, because they're great songs," says Broussard. "Our approach in the studio is if we were the tracking band in 1968, and it's just another take, as if the producer walked in the studio and said, 'OK, let's slow it down a bit, ' like with 'Love and Happiness' and 'Inner City Blues.' We weren't trying to do anything spectacular or different; we were just trying to capture the vibe that they captured back in the day. Some people will say a song sounds too much like the originals; that's a compliment to us."

Broussard's right. Where Carencro backfired in spots by relentlessly genre-jumping, SOS: Save Our Soul plays directly to Broussard's strength ' his remarkable gift for old-school style soul vocals. It's uncanny how he's able to take the songs of Gaye, Stevie Wonder, et. al and summon their timbre and phrasing, resulting in flattering comparisons to Broussard's idols.

It's the next round of Broussard's recording career that should prove most intriguing. With Island Records in his rearview mirror and a full album of covers under his belt at the age of 25, Broussard's already plotting his next move. "I feel like I'm completely surrounded by people who have a vested interest in not only my career but my personal life and well-being," he says. "My job is to work on my craft and always be a professional."