The Red Stick Ramblers are aiming high with their new deal with Sugar Hill Records. 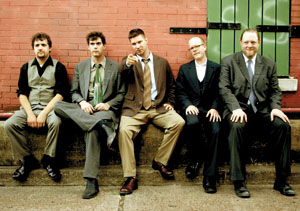 In local music, there is a downside to the success of bands such as BeauSoleil and Sonny Landreth. The more popular and famous these artists get, the less they play Lafayette. Both BeauSoleil and Landreth gig far more across the United States than down the road. With a recent record deal, this equation is set to take another casualty: The Red Stick Ramblers.

Signed to Sugar Hill Records ' which also counts Dolly Parton, Tim O'Brien, Guy Clark and Robert Cray in its stable ' the band is on the verge of becoming a star in Americana circles and increasingly absent from Lafayette. These days the Ramblers spend some 200 days and 50,000 miles a year on the road, performing across the country at nightclubs and music festivals. With the release of Made in the Shade, its Sugar Hill debut, the group's schedule has it touring 10 states through the end of 2007 ' five gigs in Lafayette and nine in states as far flung as Wisconsin and Georgia.

"Ten years ago B.B. King did 300 days on the road," says drummer Glenn Fields via cell phone from Ohio. "I mean he's 70 â?¦ who am I to complain?" he asks with a laugh. "We are trying to strike a balance where we are home enough to keep our sanity. We make our money playing music, and you can't play Lafayette three nights a week. There's just no room."

Inking the Sugar Hill deal earlier this year didn't guarantee stardom or increased ticket sales at gigs. The new album will likely get better promotion and a greater chance of being reviewed in larger publications. Though the front page of Sugar Hill's Web site features a profile on the band and Ramblers gigs top its Tours section, the Ramblers still shoulder the burden of selling out venues. The value of the label, as the band puts it, is more about working with good, honest people who share a musical vision. "No one can make you famous ' that's just not real," says Fields. "They're not coming at you with, 'Hey kid, stick with me, and I'll make you a star.'"

For singer and fiddler Linzay Young, aside from the priceless feeling of being on such an accomplished label, Sugar Hill's strength is also its staff. "They're great," says Young. "We are personal friends with several of the folks there. It really feels like we're working with friends."

In 2005, The Ramblers recorded Made in the Shade and began shopping it to labels. The band's first album was released on local imprint Louisiana Radio Records; Tennessee's Memphis International handled second and third efforts Bring it on Down and Right Key, Wrong Key Hole. Along with label changes, the band altered its lineup, replacing departing fiddler Joel Savoy with Kevin Wimmer (Racines, Balfa Toujours) and bassist Ricky Rees with Eric Frey. Josh Caffery vacated his mandolin spot.

Since the Ramblers' earliest demos, the ensemble has created its own sound by merging different genres. Heavily influenced by the Cajun swing era, it went sans accordion, instead opting for a dynamic twin fiddle lead. Another key influence is Bob Wills & The Texas Playboys' Western swing style. Young's voice resembles the Playboys' Tommy Duncan, making covers such as the classic "Take Me Back to Tulsa" an easy fit. Initially, the band also stood out for its ability to bring Django Reinhardt's gypsy jazz into south Louisiana dancehalls. Like BeauSoleil, The Ramblers aren't afraid of musical curveballs, featuring Irish reel "Pumpkin's Fancy" (including bagpipes) on the band's first record.

As time went by and the lineup changed, the Ramblers grew distinctly Southern in their sound. Like an afternoon spent on a long front porch, Made in the Shade takes its time when needed, lazily serenading on the classic "Evenin'" and painting pictures of Montana skies and cattle drives on "The Cowboy Song." When Saturday night rolls around, the record hops up and two-steps with the title cut ' and even on "Katrina," a song turning pain into celebration. Where the band's previous albums relied more on traditional tunes and standards borrowed from the songbooks of Wills, Clifton Chenier and Wallace "Cheese" Read, the new record is half originals.

"We have changed things up," says Fields. "For the original members that are still in the band, we were less Django Reinhardt and more ' I don't know ' Eddie Cochran or T-Bone Walker. More kind of jump blues that's a little more rockin' and not so cerebral. We are not trying to wow anyone with technical prowess; we are just having a good time and playing music that we love."

Though Fields puts more weight in having a good time, the record is full of talent and suggests carefully planned strokes of genius. The band's knack for rethinking shines when they mix versions of "Some of These Days" by Cab Calloway and Louis Armstrong. This talent is brought to perfection on "Tes Parents Ne Veulent Plus Me Voir" ' the Canray Fontenot classic rubbed down with Bebe Carrier's "Blue-Runner." The record ends with guitarist and songwriter Chas Justus' "The Smeckled Suite," a song packed with stylistic twists and turns. The nearly 10-minute instrumental one-ups BeauSoleil's "Zydeco Gris Gris" as it sounds like the band unwound tapes of Cajun and Persian fiddle tunes, replacing missing parts with prog rock theory.

On more familiar terms, bassist Eric Frey and Young's cold and calculated murder ballad "Les Oiseaux Vont Chanter" is one of their most traditional Cajun tunes to date. Other Cajun cuts include covers of "Laisse Les Cajuns Danser" from Belton Richard and a Wimmer-sung cover of Clifton Chenier's "Hot Tamale Baby" done in the unique Ramblers style.

"I think it's our best record so far," says Young. "I'm really proud of it. It's got more original songs than any previous record, and I think it turned out sounding really good. I think we've grown as writers over the years. I never really thought about being a songwriter when we started the band. I just wanted to play."