The quirky songwriter showcase takes over the stage at Blue Moon Saloon Saturday night for a final go-round with all-new performers. 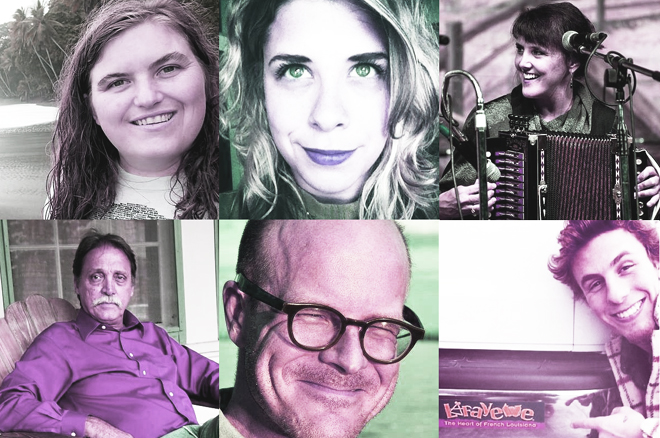 The quirky Nue Moon Revue takes over the stage at Blue Moon Saloon Saturday night for a final go-round with all-new performers.

This weekend's show will feature three performers known for their work in popular local bands and three whose songwriting talents are largely unknown. The concept for the performance conceived by Lafayette social worker/musician/actor Caroline Helm is akin to a radio variety program, with an emphasis on songwriters mostly known for other occupations or for supporting roles in local bands. Each is sponsored by a local business, and the performances - joined on stage by an all-star house band - are sandwiched between original jingles for the business performed by the Jingle Berries. It's all very merry.

As mentioned, this is the final NMR featuring new performers. Helm tells The Ind there will be a final "best of" NMR in 2014.

So who's up Saturday night? These folks (as supplied by NMR's founder):

Leigh Anne Sharp, an Alabama native, coastal scientist, wife of Pudd and mother of Thomas is steppin' out. Many don't know that Leigh Anne has a reputation among her friends as a singer; or as she stated, "I'm just a  glorified karaoke singer!" Anyway, Leigh Anne picked up the guitar at a young age and is finally writing her first songs. She has been influenced by Southern rock, moody folk music and "loud sh%t!"

Kara Guarisco, from Lafayette, will for the first time present herself outside of the theatre and film world, which is where you most likely encountered her spunky, magnetic personality and gifts. You may also have seen her at events around town as alter ego "Cherry Bounce." Kara studies French and English at UL Lafayette and has been mostly influenced musically by Patty Smith and Keith Frank.

Lisa Trahan, raised in Scott, comes from a long history of French culture and music. Lisa plays accordion, bass, guitar, triangle and le frattoir. Lisa is a member of The Magnolia Sisters and spends time playing with her dad, Harry Trahan. This will be the first time Lisa has written and performed her own songs. Lisa is an accountant, a mother and enjoys renovating old homes.

If you do not already know Barry Ancelet's list of accomplishments, then you need to. There is too much to list here; but I will give you a small introduction: Francophone folklorist, writer, singer, dancer, teacher, co-founder of Festivals Acadiens, emcee for The Liberty Theatre, researcher, husband, father and grandfather - Barry does it all, and has inspired many in regards to the Francophone culture in Acadiana. After having presented so much music in Acadiana, I am so excited to have this local gem to share with us his own music.

Drummer extraodinaire, the heartbeat of The Revelers and The Red Stick Ramblers, Glenn Fields is taking center stage to share with you his soul beyond the beat. From Baton Rouge, Glenn started on sax in the 6th grade, and in high school took to the drums. Besides playing music and being one of the most knowledgeable people on the subject of music, Glenn enjoys working on cars and has recently taken up woodworking.

Taylor Gaurisco. Tay Tay, Tay-dog, Tay of Tiff-n-Tay tails. You know, that guy from GIVERS? Or bassist from Feu Follet? Or bassist from Terrance Simien? Or I know...Spontaneous Comphunktion when he was in high school? Well, anyway now it is time to see Taylor alone. Taylor presenting his own music and that is it.