Since Anthony Jennings and Brooks Haack were not expected to contribute until next year at the earliest, it seemed like a sneak peek at hidden Christmas gifts. 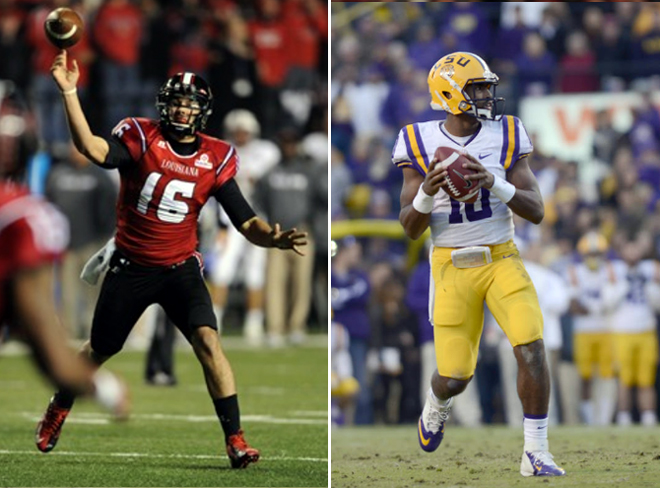 Freshman quarterbacks Brooks Haack at UL and Anthony Jennings at LSU showed promise after being thrust into the action in last week's games dues to injuries to starters.

A preference for college over professional football is like choosing to watch Duck Dynasty rather than The Governor's Wife. A choice of optimistic exuberance over cynical routine. The passion, drama, exhilaration, and despair of the Iron Bowl trumps Seattle's over-caffeinated stoners' "record-setting" screams every time.

Nowhere are the differences between the two games more distinct than at the end of a player's career. Or as Shakespeare might say (with profound apologies) "Nothing (about the game) became (it) like the leaving it."

For a professional player the end invariably comes after a decline in performance. There follows a forced retirement, a trade or an outright release. After all it's a business. For a college player the end often comes just as his potential is fulfilled or even expanded. He is honored by a ceremony before the home crowd featuring bouquets, parents, hugs and tears. Remember, it's still a game played by kids.

This joyful, melancholy scene unfolded twice last weekend as LSU and UL bid farewell to their senior classes. There were a couple of glitches. LSU senior quarterback Zach Mettenberger, the banished Georgian who packed as much baggage as potential when he arrived on campus, injured his left knee. He later underwent ACL surgery and will miss the Tigers' bowl game. Add crutches to the tears he shed as he left Tiger Stadium for the last time as a player. A day later quarterback Terrance Broadway, the leader of UL's offense, broke his arm. He'll be back next year as a senior but he's out for the important title-clinching game against South Alabama Saturday and doubtful for the New Orleans Bowl two weeks later.

Coincidently, both were injured late in the fourth quarter with their teams behind leaving potential comebacks in the hands of a true freshman for LSU and a redshirt freshman for UL. Anthony Jennings led LSU on a 99-yard drive culminating in a 49-yard touchdown pass to win his game. For his part Brooks Haack led the Ragin Cajuns to a late touchdown and only a failed onside kick prevented a possible miraculous UL win.

Fans were amazed at their performances. Since Jennings and Haack were not expected to contribute until next year at the earliest, it seemed like a sneak peek at hidden Christmas gifts. By all accounts their coaches also were surprised even though both had successful high school careers and excellent pedigrees; Jennings' father played defensive line for Georgia and Haack's sister, Matte, is an all-region softball player for UL. If Miles and Hudspeth were surprised they brought it on themselves. Neither quarterback had seen enough of the field to establish expectations.

Going into the Arkansas game Jennings was 2 for 3 passing for 23 yards and had gained 28 yards rushing, mostly as the self-described "designated sneaker." He finished the game with a QB rating of 176.2. Haack, before ULM, had appeared in three games, the last against Texas State on Oct. 5. He had passed for 49 total yards and rushed for 2. Against the Warhawks he was 10 for 14 for 126 yards, including a 25-yard touchdown.

Their success confirms yet again the importance of recruiting in college football and explains, as best as can be expected, recruitniks' boundless obsession. Both Jennings and Haack were highly recruited and were expected to play important roles one day. For those who dismiss the recruiting process or find courting high school athletes demeaning remember this: Recruiting is to college football what spring training is to baseball; it's when hope frames the future.

And for LSU and UL the future begins now.