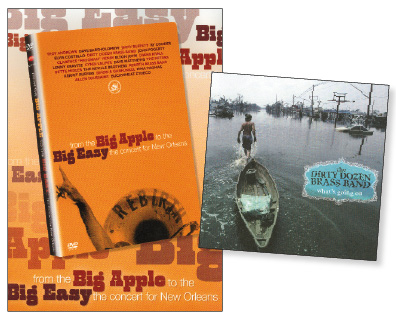 "Tonight is about the burial of Katrina and the rebirth of New Orleans," says veteran 60 Minutes newsman Ed Bradley. That sounds like part of a script for any number of upcoming Hurricane Katrina one-year anniversary events, but it was one of the first things Bradley said Sept. 20, 2005, on the stage of Madison Square Garden, kicking off an all-star benefit concert featuring a heavyweight lineup of New Orleans musical luminaries and pop and rock icons. Given the agonizingly slow pace of New Orleans' and Louisiana's recovery from both Katrina and Rita in the past year, Bradley's comments now feel like they're emerging from a bizarre and cruel time capsule. The concert has just been released on a two-DVD set, with proceeds benefiting the Bush-Clinton Katrina Fund, Habitat for Humanity, MusiCares and the Children's Health Fund, and it contains three hours of performances and musical collaborations that are at turns wistful, uplifting, angry, confounding, emotionally devastating and wildly inappropriate.

Of course, mixed in with the requisite aggravating gumbo references and tortured New Orleans metaphors from well-meaning celebrity announcers.

The ReBirth Brass Band sets the wildly divergent tone, its band members slowly strolling on stage as they play a funeral dirge, and then segueing into the jaunty classic Mardi Gras instrumental "Second Line, Part One." Crescent City songwriting legend Allen Toussaint gets feted in the next segment, leading an all-star New Orleans band through his classic "Southern Nights" and backing Art Neville ' still moving slowly after his back surgery a few years ago ' as Neville pours his soul into Toussaint's early-60s ballad "All These Things."

Spitfire Brit Elvis Costello fires the first political shot of the night when he joins Toussaint. "There's been a lot of promises made by people in the last few weeks, and this song's about what's going to happen if they don't keep them," he says before hurling himself into a scathing version of Toussaint's "On Your Way Down," with its immortal chorus: The same people you misuse on your way up / you might meet up, on your way down.

Vintage New Orleans R&B gets its due with a double shot of 69-year-old Clarence "Frogman" Henry still singing like a bird and a frog on "Ain't Got No Home," and Jimmy Buffett's good-time wink-and-nudge delivery wholly appropriate for the surprise twist of Toussaint's humorous "Fortune Teller." Aaron Neville's quivering falsetto makes its first appearance with a reading of the Sam Cooke civil-rights classic "A Change is Gonna Come." Neville's physical attributes in the last two decades have always been a microcosm of New Orleans extremes, and his persona takes on added resonance in this context. He hits the song's high notes dressed in camouflage fatigues, the cameras zooming in to capture the sword tattoo on his left cheek from his troubled pre-stardom drugs-and-jail early days.

His younger brother Cyril then takes the stage, wearing his now-infamous "Ethnic Cleansing in New Orleans" T-shirt. It's the first time the backing band really lets loose, with Cyril's growl and firebrand energy driving the band into greasy street funk. But it's impossible to watch the clip and not recall Cyril's subsequent actions, as he's blasted New Orleans with racially charged diatribes ' rarely mentioning the largely white communities of Lakeview, St. Bernard Parish and Plaquemines Parish devastated by the storm ' and the city's support for musicians. He's moved to Austin, Texas.

Actress Jessica Lange's ridiculous introduction of the "Bad Girls of the Big Easy" doesn't faze Irma Thomas, who earns the first standing ovation of the night with a powerhouse, defiant version of her signature song, "Time is on My Side." Ms. "Girls Just Wanna Have Fun" Cyndi Lauper's an odd choice to accompany Thomas and the Dixie Cups for a "Brother Jake/Iko Iko" medley, but her little-girl squeak still can't derail the vocal starpower of the female Crescent City quartet.

Elton John's appearance for "Levon" is wasted time without any New Orleans connection ' Captain Fantastic's "Madman Across the Water" or even his lightweight '80s hit "I'm Still Standing" would have been a more appropriate message. The floundering continues with the bizarre pairing of slide guitar master Ry Cooder, homegrown zydeco legend Buckwheat Zydeco and rocker Lenny Kravitz, a trio that Ed Bradley introduces as the benefit's version of The Blues Brothers. Groan. Cooder's sizzling fretwork carries a strange arrangement of Fats Domino's "Hello Josephine," but a zydeco-tempo arrangement of "When the Levee Breaks" ' featuring Kravitz on lead vocals ' is a train wreck. Irma Thomas gets things back on track with a knockout version of Bessie Smith's levee-break lament "Backwater Blues," with Cooder's mournful blues guitar drone helping earn another standing ovation.

Jimmy Buffett returns at the beginning of the second DVD with his full Coral Reefer Band behind him and Lafayette virtuoso Sonny Landreth guesting on slide guitar. Buffett busked in the French Quarter as a teenager, and his French Quarter club Margaritaville is still up and running. He becomes the concert's voice for Mississippi Katrina victims with the heartfelt narratives "Pascagoula Run" and "Son of a Son of a Sailor," underscoring how many fishermen's lives were affected by the storm. And his unexpected cover version of Neil Young's "Heart of Gold," with Dave Matthews guesting on lead vocals, is one of the show's highlights. With the members of the Coral Reefers contributing dead-on accordion, fiddle and steel drum accompaniment (and an evocative Landreth solo), Young's anthem of searching turns into an all-inclusive musical statement that honors Louisiana musical traditions stretching from New Orleans to Acadiana.

If only he'd left the stage after that moment. Instead, Buffett lingers for the show's most embarrassing moments, pandering to his Parrothead fans with let's-party anthems "Fins" and "Margaritaville." With judgment like that, it's surprising he didn't play "Cheeseburger in Paradise," too. He's barely redeemed by Paul Simon, who comes out to join Buffett for a romp through Frankie Ford's Louisiana anthem "Sea Cruise," with the whole crowd parroting back the "Ooh-wee baby!" refrain.

Legendary Creedence Clearwater Revival frontman John Fogerty brings the show back to its purpose, rocking out on full-scale nod-to-Louisiana blowout versions of "Born on the Bayou" and "Proud Mary." The Dirty Dozen Brass Band is then joined by Elvis Costello and Fats Domino collaborator Dave Bartholomew, with Costello's distorted vocal and snarling version of "The Monkey Speaks His Mind" the show's most blistering sociological commentary. Costello's wife, blonde jazz bombshell Diana Krall, swings behind the piano for another surprise, deftly scatting her way through Fats Domino's "I'm Walking" with so much style that she even draws some appreciative nods from the Dirty Dozen members.

Paul Newman makes the best introduction of the night, skipping the hyperbole and warmly ushering in New York heroes Simon and Garfunkel. A masterfully arranged full-band version of "Mrs. Robinson" kicks off their trio of songs, with an especially touching version of "Homeward Bound" an appropriate choice. They also provide the emotional highlight of the concert, as Art Garfunkel steps to the microphone and proclaims the next song, despite all the times he's sang it before, has never meant more to him than tonight. His opening verse of "Bridge Over Troubled Water" brings a hush over the crowd, and it's a stunning moment when Aaron Neville emerges from the shadows to sing the next verse. Its impact is highlighted even further by Neville's newest accessory ' a baseball cap emblazoned with "Evacuee."

To this day, Aaron Neville has never returned to New Orleans, citing problems with asthma and moving to Nashville.

From there the Nevilles take over, with Art leading definitive funk band the Meters through its Mardi Gras anthem "Hey Pocky A-Way." The band steps back for Art to play some church-organ accompaniment to Aaron's solo gospel nod on "Amazing Grace." The evening's participants all crowd the stage for the finale, with Cyril Neville ironically taking the lead vocal on a ragged version of "When the Saints Go Marching In." The concert ends on a chaotic, unfinished note with no official announcement, and the DVD credits start to roll while numerous performers and audience members mill about and look at each other wondering, what do we do now?

The Dirty Dozen Brass Band answered that question by recording What's Going On, its tour-de-force new CD which reimagines Marvin Gaye's landmark 1971 album post-Katrina. (It hits stores Aug. 29.) The veteran Crescent City ensemble has been a powerful music force since it ushered in the modern brass band era in the '70s by incorporating contemporary jazz into the mix, and most of its eight members lost their homes to Katrina. The themes Gaye first tackled ' a country at war, poverty, racism, environmental destruction and the challenges facing the African-American community ' are even more relevant today, especially in New Orleans.

The band's reinterpretation of Gaye's title track is the album's most angry moment, kicked off with a censored soundbite of New Orleans Mayor Ray Nagin's desperate, rage-fueled radio interview from that first week when he pleaded, "Get off your goddamn asses, and let's fix the biggest goddamn crisis in the history of this country." Rapper Chuck D spits out rhymes with venom: No Child Left Behind / What, you think we're all blind / Even the blind coulda seen the aftermath of Katrina.

Soul songstress Bettye LaVette takes the lead vocal on "What's Happening Brother," asking if things are really getting better, "like the newspaper says." The "help me somebody" group chorus in "Flyin' High (in the Friendly Sky)" is delivered with a simultaneous mix of pleading and fierce pride. "Save the Children" is chilling, delivered with a rotating mix of squalling brass blasts that turn into a melodic meditation; Ivan Neville's raspy lead vocal on "God is Love" is a reminder of how faith has been a lifeline for so many storm survivors. "Mercy Mercy Me (The Ecology)," featuring Philly rapper G. Love, rings like a slinky hip-hop call for coastal restoration. "Wholy Holy" is transformed into an off-kilter bluesy swagger, its final notes fading like a second-line funeral march with no final destination.

The album concludes with rapper Guru putting his own stamp on "Inner City Blues (Make Me Wanna Holler)," buoyed by a deep tuba line and a defiant pledge from Guru: We can surpass the pain and degradation / suffering and sacrifice will not be in vain / because the beauty that is true will always remain.

One can only hope.