The cream of the crop of hurricane-relief CDs. 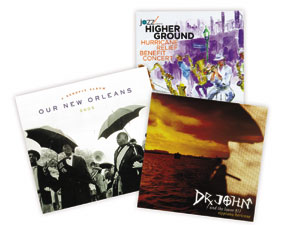 Music is the universal language, and the outpouring of support in the form of hurricane'relief CDs shows how deeply Hurricane Katrina affected the musical community of New Orleans, Louisiana, and the whole country. The following three CDs are the most intriguing of the batch, and benefit a variety of organizations including the New Orleans Musicians Clinic, the Jazz Foundation of America and the Voice of the Wetlands.

Under different circumstances, part of the roster of participating artists in this collection of newly recorded tracks would drive New Orleans music purists crazy. They'd complain that Cajun and zydeco music don't come from the Crescent City and would start getting indignant about the inclusion of BeauSoleil and Buckwheat Zydeco at the expense of New Orleans artists. But at a time when all hands are needed on deck, BeauSoleil's roiling "L'Ouragon" ("The Hurricane") and Buckwheat Zydeco's dirge "Cryin' in the Streets" serve as reminders that our common musical ground outweighs our differences.

Optimism abounds with Allen Toussaint's thumping new version of his 1970s hit "Yes We Can Can," its lyrics of harmony and cooperation never more appropriate. Things get darker when soul queen Irma Thomas recasts Bessie Smith's "Backwater Blues" as a scabrous hard blues, breathing new emotional resonance to the lyrics of levees breaking. Dr. John achieves the same effect with a late-night reading of "World I Never Made," singing of feeling like a stranger in a strange land. Davell Crawford's solo piano rendering of the spiritual "Gather by the River," meanwhile, is a prayer for the ages, its twin themes of water and salvation eerily capturing a city's landscape.

Charlie Miller's spoken-word and trumpet incantation "Prayer to New Orleans" is strangely fitting: a bit wobbly, a bit beatnik, a bit spiritual, it's the sound of a lifelong New Orleans trumpet player meditating on his home. Re-recording Louis Armstrong's "What a Wonderful World" as an instrumental powered by a full string section, with Donald Harrison's alto sax taking the lead, is another nice departure. Other fresh takes on standards turn familiar warhorses into mission statements; listen to Eddie Bo's defiant "When the Saints Go Marching In" and the displaced Preservation Hall Jazz Band bringing its post-Katrina experience to "Do You Know What it Means to Miss New Orleans."

In that same vein, the most moving cut is "Tipitina and Me," Toussaint's new version of the rollicking Professor Longhair piano anthem. Cut here as an instrumental, Toussaint morphs the signature syncopated intro into a brooding, minor-key lament reminiscent of the gothic-tinged compositions of 19th century composer Louis Gottschalk. It's a powerful reminder that many Louisiana cornerstones may never be the same again.

While other hurricane-relief CDs like the two-CD set Come Together featuring mainstream stars like U2 and Faith Hill will surely raise more money for the cause, this live recording is the most poignant reminder of New Orleans' contribution to American music. The Crescent City birthed jazz and all its offshoots, and this concert recorded at Lincoln Center (where Wynton Marsalis is artistic director) has the biggest dose of jazz ' in myriad forms ' of any of the current relief CDs.

Opening with Shirley Caesar and Eric Reed's stomping gospel anthem "This Joy" as an invitation, esteemed trumpeter Terence Blanchard (of Spike Lee soundtrack fame) steps up and renders a lush melancholy version of "Over There." Former Marsalis bandmate Marcus Roberts commandeers the piano for a biting, syncopated run through Jelly Roll Morton's "New Orleans Blues," underscoring the often-blurry line between Big Easy jazz and blues. In one of the disc's emotionally charged moments, rising young New Orleans trumpeter Irvin Mayfield ' whose father was missing at the time of the concert and later found dead from the flood ' unfurls a reach-for-the-heavens dramatic solo on the spiritual standard "Just a Closer Walk with Thee." And New Orleans' musical Jordan family reunites with rooftop rescuee Marlon Jordan for a stirring performance of the wistful ballad "Here's to Life."

For a sense of history, Wynton Marsalis' Hot Seven blows through a breathless take on legendary trad-jazz cornetist King Oliver's "Dippermouth Blues," the full horn and reed section sprinting next to the banjo and rhythm section parts. And Aaron Neville's shout-outs to the Ninth Ward, Seventh Ward, Treme and the Mardi Gras Indians in a version of "Go to the Mardi Gras" (accompanied by brother Art on keyboard) are goosebump-inducing.

There are a few missteps ' Bette Midler's oversized Broadway persona is a poor fit for the proceedings, for example ' but overall it's a stirring program. And for sheer unexpected emotion, songbird Norah Jones hits the highest ground with a gutwrenching solo version of Randy Newman's "I Think it's Going to Rain Today," conveying the loneliness, despair and glimmers of hope of the last three months.

In a state filled with distinctive musical voices, Mac Rebennack's psychedelic swamp-hoodoo growl is matched only by Aaron Neville's angelic flutter. Rebennack also has his full trick bag of Crescent City piano rhythms and the stutter-funk of his longtime Lower 911 band at his disposal, making everything he plays sound entirely his own.

But Doctor aficionados and neophytes alike will want the EP for Rebennack's "Wade: Hurricane Suite," a four-part movement freshly composed for the album. In its four sections ("Storm Warning," Storm Surge," "Calm in the Storm" and "Wade in the Water"), you can almost feel Rebennack in the studio wrestling his emotions into music. Each part feels like a song sketch, alternately capturing waves of anger with the drum crescendoes and Hammond B-3 waves of "Storm Warning" and achieving a sense of stillness in the languorous piano stroll of "Calm in the Storm." And when the band starts chanting "Coming back / stronger than ever" in "Aftermath," you know that Louisiana musical icons like Dr. John are in this relief effort for the long haul.