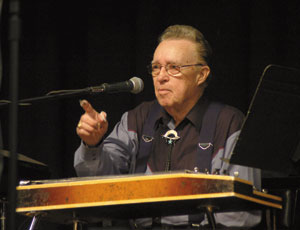 At 79 years old, pedal steel guitarist Don Helms does pretty much whatever he wants these days, but he's managed to live his whole life that way.

"I'm doing what I've been doing for over half a century," Helms says in a phone interview from his Nashville home. "I've played Hank Williams music in two different millenniums, seven consecutive decades. Yeah, I've been doing this a long time, but I'm doing what I love to do, and I'm doing what I do best. I just go where they want to hear some Hank Williams music. Hank never told me what to play. He would say, 'The song goes like this. Give me something.' I always played what I wanted to play. And it just so happens that the people still remember the Hank Williams sound, and they want it. As long as the Lord gives me reasonably good health, me and my wife will go there and I'll play 'em some."

Helms rolls into Lafayette on Saturday, July 29, as part of Liberty's Old Tyme Country Goes to the Heymann show at the Heymann Center for the Performing Arts. Since 2000, Terry Huval has been playing classic country music to packed crowds at the Liberty Theater in Eunice, sometimes billed as a tribute to the late Hank Williams and other times as simply a night of old time country music.

This Saturday night's show won't be much different, and all profits will go to the city of Eunice to support the continued operation of the historic Liberty. "We're just trying to keep that old theater operating and viable so that it continues to serve in the way it has for our local culture," Huval says.

The night features Helms — the last member of Hank Williams' Drifting Cowboys band — Huval, Hugh Harris, Pope Huval, Al Berard, Karleen Berard, Maegan Berard, Laura Huval, Helen Boudreaux, Barry Ancelet and others performing the songs of Hank Williams, the Carter Family, Patsy Cline, Ray Price and Ernest Tubb. "We center on songs that are really old," Huval says. "It's rare that we will do a song that goes into the '60s or later. It's typically 1940 and '50s country music, the stuff that people don't really get the chance to hear any more. Don brings a lot of depth, from playing with not only Hank Williams but many other country musicians like Patsy Cline, Ray Price, Johnny Cash, Lefty Frizell and the list goes on and on."

Add to that list Ernest Tubb, Jim Reeves, Loretta Lynn, Webb Pierce, Red Foley and Brenda Lee, just to name a few. On Patsy Cline's "Walkin' After Midnight," those are Helms' lonely licks on the steel guitar, the same one he'll be playing Saturday night. He played every pedal steel part for Hank Williams from 1950 until Williams' last recording session in September 1952.

In 1943, Helms started backing Williams as one of his Drifting Cowboys. After a two-year hitch in the Army, Helms rejoined Williams onstage when he became a regular member of the Grand Ole Opry in 1949. Helms was only 22 years old at the time. As a kid, Helms had dreamed of playing the Opry. "I never dreamed that somebody day I would," he says. "The first night I went on there with Hank, I tell you, I felt so proud. I couldn't hardly catch my breath I was so thrilled."

Helms also accompanied Williams in the late '40s for his stint on the Hadacol Caravan, a traveling musical variety show across Louisiana and the southeastern United States that touted the virtues of Dudley J. LeBlanc's Hadacol, a health tonic loaded with 12 percent alcohol. It was also Helms' first visit to Lafayette, the starting point for the caravan.

"I just fell in love with those people," Helms says. "Hank Williams loved the Cajun people. When we would go down there they would just follow Hank around. Boy, they thought he was the greatest thing. He sang their kind of music. In fact he wrote 'Jambalaya' just for the Cajun people. He was fascinated with some of the food and the names they have down there. The Cajun names like the Fontenots and the Thibodeauxs fascinated him. He learned all of those words and put it together that told a little story like the Cajuns would tell it. And they thought, boy, he's singing our song, and he was."

Helms says for all of the stories about Williams and his carousing, the history books have it wrong. Williams drank all right, but not like they said he did. "He would get stoned out of his mind for three or five days," Helms says. "Then he wouldn't touch a drop for five or six months. Then he'd get stoned on his butt again. That's the kind of drinking he did. He didn't just drink. He got drunk for about four or five days then he wouldn't touch a drop. But the people who write the books have him drunk all the time. My one wish in life is that everybody who had written a book about Hank Williams had met him."

Williams' drink of choice? "In a glass," Helms says. "If he drank a beer, that would start him, and he would drink whatever was in a glass or a bottle. He wasn't particular about the brand."

Williams' bouts with the bottle led to him being booted off of the Grand Ole Opry in August 1952. In September he summoned Helms to Nashville for a recording session. Williams and the Drifting Cowboys recorded "Kawliga," "Take These Chains From My Heart" and "I Could Never Be Ashamed of You." Williams then played Helms a few lines to a song he had recently written and told him to play it on the pedal steel.

"So I played him an intro, and we sang the song through one time," Helms says. The song was recorded in one take. "Nobody made a mistake bad enough to require us to do it again. We went through it one time, never played it on the stage, just that one time in the studio, and it was 'Your Cheatin' Heart.' After that, I never saw him alive again. The record didn't come out until after Hank had died."

Williams passed away on New Year's Day 1953 at the age of 29. When "Your Cheatin' Heart" was released later that year, it went to No. 1 on the country charts where it remained for six weeks.

Helms went on to record and perform with 45 members of the Country Music Hall of Fame throughout his career. His undeniable tear-soaked, honky-tonk sound transformed hillbilly music into an American commodity and defined the golden era of country music.

"I think I've paid my dues," Helms says. "I could hang it up, and a lot of people wouldn't care. But there are a few that would still like to hear that steel guitar from the Hank Williams records. I'm about the only one around that plays that, so I'm going to play it for 'em."