Festival International and the 2006 New Orleans Jazz & Heritage Festival were emotional respites from the hurricanes of 2005. 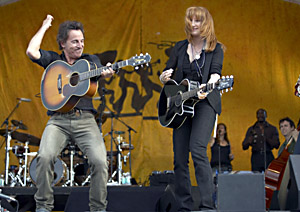 On the surface, the 2006 New Orleans Jazz & Heritage Festival looked like a typically blissful Jazz Fest: large and respectful crowds, soulful music you can't find anywhere else on the planet and a smorgasbord of Louisiana food ranging from cochon du lait poboys to Prejean's duck and andouille gumbo. But only someone in the deepest stages of denial could have attended this year's Jazz Fest without feeling the pronounced dual emotions of despair and hope that permeated the Fair Grounds.

Evidence of Hurricane Katrina lurked around every corner. Blues and soul queens Marva Wright and Leigh "Little Queenie" Harris back from their new homes in Maryland and North Carolina. Legendary Creole family the Bacquets still displaced in Atlanta, their signature fried chicken unavailable for the first time in more than a decade. Tearful reunions of brass bands and gospel choirs whose members have been scattered throughout the country since last September. The Grandstand closed to the public, and one of its 15-foot atrium windows still blown out and covered with plywood.

But for two weekends, hope triumphed over despair. In one remarkable performance after another, Louisiana musicians and national musicians proclaimed their love for the city in song, offering Louisiana residents a respite from sadness and reminding out-of-towners how much work still needs to be done to make the state whole again. What follows are the highlights of a festival that felt more like a revival.

Festival International set the tone for the first weekend of Jazz Fest with a New Orleans triple-bill on Thursday night, April 27. Roots rockers the subdudes played a rollicking set that had a packed crowd at Parc International singing along with "Let's Play" and the title track from the band's new CD, Behind the Levee. Percussionist Steve Amedee traded his tambourine for a playful, extended workout on a Duncan yo-yo, and the band refrained from any hurricane references, instead cranking up favorites like "Late at Night" and "Standing Tall." Soul Queen of New Orleans Irma Thomas followed, thanking Lafayette for opening its hearts to evacuees and running through a set of hits like "It's Raining" and "You Can Have My Husband (But Please Don't Mess with My Man)." And elegant piano professor Allen Toussaint's indomitable spirit prevailed with his funky, uptempo version of "Yes We Can Can," which has become an anthem for rebuilding Louisiana.

TAKE I-10 TOWARD HIGHWAY 61 AND KEEP GOING

Bob Dylan's Jazz Fest set could have been special. Dylan's long appreciated New Orleans charms, ever since a 1965 visit to Mardi Gras inspired the carnival lyrics to "Mr. Tambourine Man," and he subsequently holed up in the Crescent City to record his acclaimed 1989 "comeback" album Oh Mercy. (Dylan devoted a third of his acclaimed autobiography Chronicles to his time in New Orleans and Louisiana, including writing about his house in Audubon Place.) It wasn't unreasonable to think that Mr. Zimmerman's first New Orleans appearance post-Katrina might have something to say in his first post-Katrina New Orleans experience.

Instead, he sequestered himself near the back of the stage behind an electric keyboard, rarely even looking at the audience and turning in a ragged by-the-numbers performance that rarely deviated from his recent set lists. If Dylan was trying to make statements with the flood imagery in "High Water," the venom in "Positively 4th Street" or the "How does it feel / to be without a home" chorus in "Like A Rolling Stone," it was blunted by his hoarse vocals and complete lack of communication with the audience. (Besides introducing his bandmembers during the encore, he didn't say one word to the crowd.) No one expected a big speech from the notoriously inscrutable Dylan, but his demeanor and performance was arrogance and narcissism personified ' he might as well have been playing a routine tour stop in Cleveland or Milwaukee.

Legendary Night Tripper Mac Rebennack ' aka Dr. John ' followed Dylan and didn't need to launch into his trademark raps between songs ' he let his music do the talking. Few performers embody the spirit and music of New Orleans like the Good Doctor, and Rebennack delivered with a headline set that was a virtual history lesson of Crescent City sounds. He dedicated "My Indian Red" to late Mardi Gras Indian Chief Tootie Montana, interspersing a few verses of the spiritual "Down by the Riverside." The sentiment of "Sweet Home New Orleans" and "Goin' Back to New Orleans" needed no explanation, and Rebennack pulled out an unexpected and perfect choice for his encore. Rather than play one of his signature hits like "Such a Night," he took a page from Sly Stone's songbook and played a funked-up version of "Thank You (Falettinme Be Mice Elf Agin)" ' with thousands of fans singing along with the chorus and thanking Rebennack for letting them feel good again.

Legendary blind guitarist Snooks Eaglin looked especially frail as he was led to the stage at Jazz Fest ' unsurprising as the 70-year-old Eaglin and his family were left homeless after Katrina. But the past eight months were momentarily forgotten during his funky, inspiring set, which featured Eaglin staples like a sing-a-long on the Isley Brothers' "It's Your Thing" and the second-line Carnival anthem "I Went to the Mardi Gras." Prior to his encore, he said, "Before I play this song, I just want to tell everybody to stay strong, work together and rebuild this city" ' and then sang a moving version of the hymn "God Will Take Care of You."

The deep roots of New Orleans traditions and music at the Fair Grounds are an extension of everyday life in New Orleans. Nowhere was that more evident than Sunday morning at St. Augustine Church in the heart of the Treme District. St. Augustine is New Orleans' oldest African-American church, and the Archdiocese of New Orleans tried to shutter the church post-Katrina, citing financial hardships. The decision was reversed after heated protests, and parishioners and supporters alike made the April 30 morning Mass a moving statement of purpose and spirituality. In addition to St. Augustine's regular choir and band, New Orleans vocalist extraordinaire John Boutte performed "Old Time Religion" and "In the Garden," while rising young trumpeter Christian Scott played the role of Gabriel with solos aimed for heaven. A Mardi Gras Indian performance of "Two-Way Pocky Way" ' introduced as a song of peace ' underscored the city's deep faith and unshakeable connection to its indigenous culture. Superstar jazz vocalist Cassandra Wilson was among the faithful in the pews showing her support.

FROM NEW JERSEY TO NEW ORLEANS, WITH LOVE

Bruce Springsteen's epic, heartfelt performance to close out the first weekend was one for the ages. In a nearly two-hour performance featuring material from his new CD, We Shall Overcome: The Seeger Sessions, Springsteen encapsulated the resiliency, anger and determination of hurricane victims like no other performer. When he wasn't keeping the crowd dancing with uptempo favorites like "Open All Night" and "You Can Look (But You Better Not Touch)," the Boss sang to and for New Orleans, illuminating every poignant nuance in the lyrics of folk classics like "O Mary Don't You Weep," "We Shall Overcome," "Jacob's Ladder" and "Eyes on the Prize." Midway through his set, he took a pointed jab at President Bush's response to the hurricane, dedicating "How Can a Poor Man Stand Such Times and Live" to "President Bystander." The set's watershed moment came when he dedicated "My City of Ruins" ' a song he originally wrote for Asbury Park ' to New Orleans. A hush fell over the crowd as Springsteen sang the second verse:

Now there's tears on the pillow
Darlin' where we slept
And you took my heart when you left
Without your sweet kiss,
My soul is lost, my friend
Tell me, how do I begin again?
My city's in ruins

By the end of the song, Springsteen transformed the song from a wake to a call to action, imploring the crowd to "C'mon, rise up!" When he delivered a hymn-like version of "When the Saints Go Marching In" as his final encore, he accomplished what no local or national politician has done since the hurricanes: he provided a message of comfort, hope and inspiration to a state hungry for it.

U2 guitarist The Edge was an early supporter of Louisiana musicians affected by Katrina, lending his time and money to the Music Rising benefit project. At Jazz Fest, he showed that his devotion to the cause wasn't a one-off gesture. The Edge was everywhere throughout the first weekend of Jazz Fest. First he attended a Grammy Awards-sponsored event on Thursday, then spent part of Saturday at the Fair Grounds dancing and taking pictures during Snooks Eaglin's set. Later that night he sat in unannounced with New Orleans harmonica wizard Jumpin' Johnny Sansone at Liuzza's by the Track, then capped the weekend on Sunday by sitting in with the Dave Matthews Band. Matthews, meanwhile, donated $1.5 million to Habitat for Humanity's Musician Village currently under construction in the Crescent City. And Elvis Costello sat in with Allen Toussaint and performed songs from the duo's upcoming June release The River in Reverse, which should help keep New Orleans and Louisiana in the national spotlight this summer.

New Orleans' Imagination Movers played a triumphant set on the main Acura Stage to a packed crowd, proving that the band's engaging children's songs are reaching parents and kids alike in wide numbers. Three of the four bandmembers lost their houses after Katrina, but they've channeled their energy into a high-energy stage show that just landed the Movers a television production deal with Disney. And the group's Jazz Fest set was augmented by Galactic members Stanton Moore and Jeff Raines, making kids' anthems like "Clean My Room" into funk showcases.

The Skatalites at Festival International; trumpeter Terence Blanchard's impassioned speech in the Jazz Tent endorsing Mitch Landrieu for mayor of New Orleans; Lafayette's Pine Leaf Boys at the Fais Do Do Stage at Jazz Fest; Susan Cowsill dedicating a song to her brother Barry, who died in the flood after Katrina; and Irma Thomas and Allen Toussaint backing Paul Simon for "Bridge Over Troubled Water."

AIN'T THAT A SHAME, BUT WE'RE STILL THANKFUL

Fats Domino's set to close out the 2006 Jazz Fest promised to be the triumphant, emotional capper to the festival, but Domino canceled his performance at the last minute, citing illness. Trumpeter Nicholas Payton was also a no-show due to a lip injury. But neither disappointment could cast a cloud over the 2006 Jazz Fest. Festival organizers and Louisiana musicians overcame tremendous odds and provided indelible memories for hundreds of thousands of people that won't soon be forgotten.