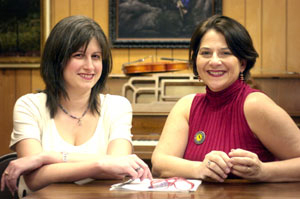 The fund is just one part of a multifaceted effort to help evacuated musicians get what they need, from prescription medications and housing to places to play. One part of that effort is assisting musicians who've been scattered from Atlanta to California find help through the New Orleans Musicians' Clinic, now based in Lafayette. A group of club owners and music enthusiasts, the Lafayette Music Alliance, has banded together to provide musicians with instruments, opportunities to perform and, most importantly, a way to connect.

"We're asking New Orleans musicians and local musicians to come together to make things right," says Kathy Richard, program coordinator of Healthcare for Musicians. "New Orleans music is hundreds of years old and is the foundation of so many other kinds of music. New Orleans is the birthplace of jazz. We have to do something to preserve that musical culture."

At a meeting last Wednesday night at Grant Street Dancehall, about 150 musicians gathered to fill out needs assessments and talk with social workers, advocates and local musicians who just want to help. The music club was eerily silent as musicians talked among themselves and greeted lost friends, says Richard. Despite the open mic, no one sang, though several weary displaced musicians stepped up to thank the community for its help. Looking through the needs assessments Thursday morning, Richard says requests ranged from help with clothes to assistance with getting gas to move on. Some asked for help in finding a guitar or a set of keyboards.

Healthcare for Musicians is operating a help line where musicians displaced to Acadiana can call for assistance of all kinds. They can also get referrals to health care providers. One major service the group is providing is referral to MusiCares, the Grammy Foundation program that provides help to musicians in need. MusiCares has allocated $1 million to hurricane disaster relief and has streamlined its application process to help victims immediately. "They're cutting checks directly to hotels for housing and to music stores for instruments," Richard says.

Those wishing to donate to Healthcare for Musicians, the New Orleans Musicians Clinic or the New Orleans Musicians Emergency Fund should contact Richard. Be patient on the phone, she advises; they will help displaced musicians in need. Richard also says the Cajundome is operating a walk-up window where evacuees can go to get help with medications, even if they are not staying in the shelter.

The New Orleans Musicians' Clinic, meanwhile, has also opened shop in Lafayette, thanks to patient advocate Michelle Gegenheimer. Gegenheimer says she's been in touch with musicians scattered all over the country. Despite having to work long-distance with iffy phone connections, she's been able to help several patients in far-flung locations get the medical attention and medications they need. Wednesday, for instance, Gegenheimer worked the phones to secure needed asthma medication for a New Orleans musician now in Minnesota.

"The idea is to just act as a home base, to let all the musicians scattered to Atlanta, Florida, Minneapolis, California, even to Tennessee, know that if they call me I can help them," she says.

Technically, Gegenheimer is an employee of the LSU Health Care Network, one of two organizations that partnered with The New Orleans Musicians Clinic. The Musicians Clinic patient database on the LSU server is lost for the moment, but they're piecing things together nonetheless.

NOMC's other partner organization, the Sisters of Charity, is setting up temporary operations in Opelousas, says Gegeheimer.

The loss of New Orleans is a loss to Lafayette musicians, too, many of whom counted on regular gigs at Crescent City venues as part of their livelihood. But local percussionist Colin Galyean of the band The Board says he's eager to help his New Orleans colleagues, even though gigs are already tight in Lafayette. "Musicians need to play," Galyean says. "I don't think competition is a worry. This is about composition."

Clubs in the Lafayette Music Alliance will soon announce extended hours for gigs to allow more of the displaced musicians to play. A central location where donors can bring musical instruments will also be announced by the New Orleans Musicians Emergency Fund. A street dance to benefit Healthcare for Musicians featuring Michael Doucet and BeauSoleil and numerous other headliners will be held Thursday, Sept. 15, from 6-9 p.m at Cité des Arts. Volunteers will be on hand to take donations for the New Orleans Musicians Emergency fund as well.